After many ups and downs on ‘The Bachelor Winter Games,’ Clare and Benoit found love, ending with a proposal during the reunion show. See her stunning ring here!

Clare Crawley and Benoit Beausejour-Savard are engaged…and her ring is GORGEOUS! Benoit proposed with a fabulous, oval cut sparkler during The Bachelor Winter Games reunion special, which was pre-taped and aired on Feb. 22. The ring featured one big diamond, set inside a diamond halo with diamond side stone accents. The ring is estimated at 2.5-3.5 carats and likely worth somewhere between $25,000 and $45,000, according to Kathryn Money, VP of Strategy and Merchandising at Brilliant Earth. Fans began speculating that Clare would be getting engaged by the end of Winter Games, after the show’s official Twitter account posted a photo of a woman’s hand with the ring in full view on Feb. 16. Many viewers pointed out that the pinky ring on the woman’s finger looked just like one that Clare always wears, so it didn’t take much detective work to put two and two together!

The real mystery, though, was which guy popped the question, After all, Clare was at the center of this season’s biggest love triangle! She formed a connection with Benoit fairly quickly, but also fell for Christian Rauch. Clare was not able to fully commit herself to Benoit on the show, and he didn’t want to start something if she wasn’t all-in. After a tear-filled conversation, Benoit decided to leave the show during episode two, and Clare began focusing her attention on Christian. However, it didn’t take long for her to realize that he wasn’t the guy for her, and they both decided to end their journey before the third episode ended.

Well, after filming ended in December, Clare finally got her happily-ever-after when she and Benoit started talking again, and now, they’re ready to spend the rest of their lives together! Check out this bling: 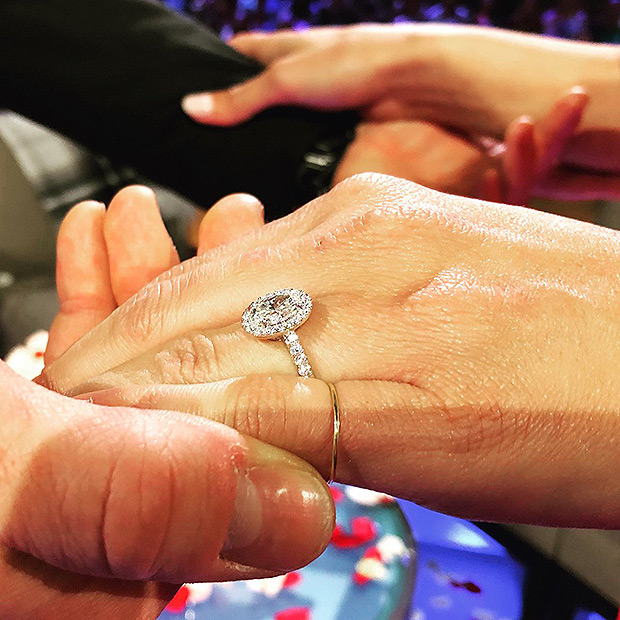 Clare first appeared in the Bachelor franchise on Juan Pablo’s season of The Bachelor in 2014. She finished as the runner-up, then headed to Bachelor in Paradise, where she was eliminated after three weeks. Clare vowed never to return to the franchise again after her failed attempt on BIP, but made an exception for the Inaugural Winter Games — and it certainly paid off! Benoit was on season one of The Bachelorette in Canada.

HollywoodLifers, are you shocked about Clare and Benoit’s engagement?!