New dad Travis Scott, 25, couldn’t have looked happier while attending a Houston Rockets vs. Denver Nuggets game in Texas on Feb. 9! The rapper was all smiles as he watched on throughout warmups, while his baby mama Kylie Jenner, 20, was nowhere to be seen. Is Travis even helping out with their newborn baby Stormi Webster? Check out the photo of Travis below.

While it certainly looks like the “Butterfly Effect” singer is busy out having a great time while his girlfriend stays home with their child, their relationship is actually pretty solid right now. As we’ve previously reported, the couple have been getting much “closer” since welcoming their firstborn on Feb. 1. “Stormi’s birth has done a lot to bring Travis and Kylie closer, he seems to be a lot more present since she had the baby. He’s been spending most nights with Kylie and sleeping in her bed,” a source close to the lip-kit mogul previously told us. See pictures from Kylie’s pregnancy here!

Travis has also been helping out with his kid more than people thought he would. “Since Stormi was born, Travis has been around more than anyone was actually expecting,” a source close to Kylie told us. “So far he’s actually been more hands-on with Stormi than Kanye [West] has been with Chicago. Not that it’s a competition, but it’s kind of ironic considering all the pressure that was being put on him to make his presence felt — Kylie’s made a few comments.”

A source also confirmed to People that the parents have worked out a great system that allows the new father to still do things like head to Houston for an NBA game. “Kylie and Travis are a good team… Travis is able to do his own thing during the day as well, but he helps Kylie out at night,” the source told the magazine. “He has cut down on work and only has a few shows coming up.” Sounds like everything’s going swimmingly for the pair and their baby! 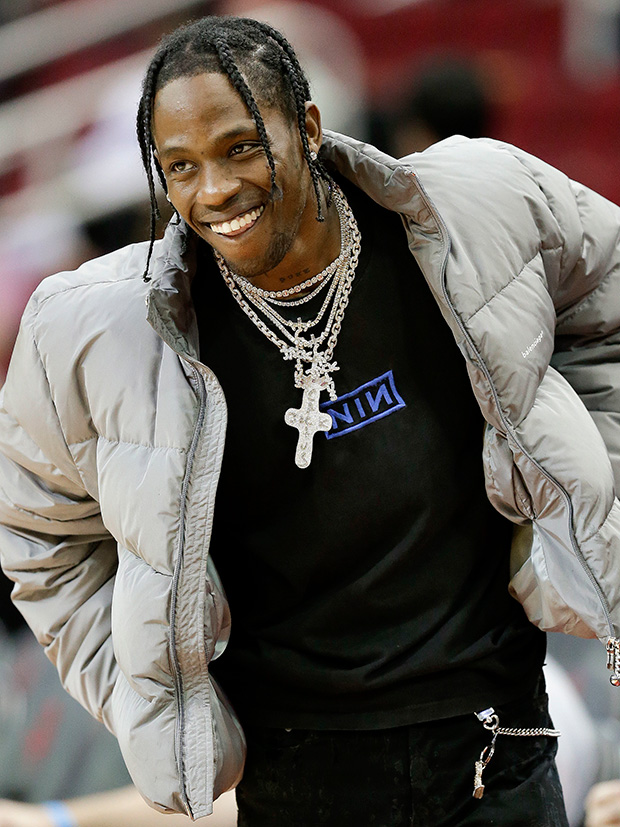 HollywoodLifers, are you glad to see Travis looking so happy?