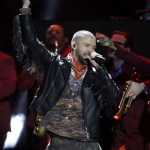 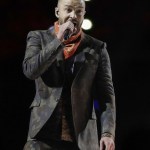 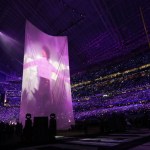 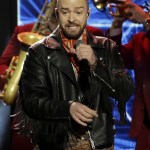 Justin Timberlake headlined the Pepsi Super Bowl LII Halftime Show, and he shocked fans when he referenced his infamous performance with Janet Jackson!

Justin Timberlake, 36, took to the Super Bowl Halftime Show stage for the third time in his career, treating fans to a medley of his best hits during the Feb. 4 event at the U.S. Bank Stadium in Minneapolis, MN.  After a video intro from Tonight Show host and longtime collaborator Jimmy Fallon, JT opened with his new single “Filthy,” and performed classics like “Rock Your Body,” “Can’t Stop The Feeling” and of course “SexyBack!” Forget the Philadelphia Eagles and the New England Patriots — tonight was all about JT (and his talented band, the Tennessee Kids.)

Of course, some fans were hoping for a surprise cameo from Janet Jackson (you’ll remember that JT accidentally ripped off Janet’s bodice as they sang “Rock Your Body” during that infamous performance) or NSYNC, but alas, it was pretty cut and dry. JT showed off his moves while rocking a slick leather jacket and red bandana around his neck, but there were no major stunts. During one amazing moment, however, he did a duet with a hologram of the late legend Prince. Pretty awesome!

Conveniently, Justin also released his fifth studio album Man of the Woods on Feb. 2. The record includes features from Chris Stapleton and Alicia Keys, and you’ll definitely want to check it out if you haven’t already!

Lady Gaga, Coldplay, Beyoncé, Katy Perry, Bruno Mars, Madonna, The Who, Bruce Springsteen & The E Street Band, Tom Petty and the Heartbreakers, Prince, the Rolling Stones, Paul McCartney, U2 and more have performed at Halftime in the past, but it’s safe to say that JT held his own tonight!

HollywoodLifers, what did you think of JT’s Halftime Show performance? Tell us if you loved it — or if you felt let down!