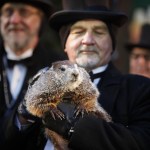 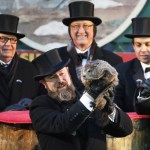 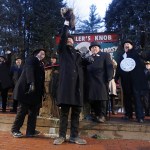 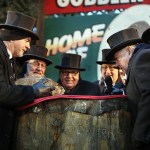 Punxsutawney Phil has spoken! After coming out of his burrow on Groundhog Day 2018, the critter has determined whether we’ll have a longer winter or early spring. Here’s his prediction!

It’s official: Punxsutawney Phil DID see his shadow, which means we’ll have SIX MORE WEEKS OF WINTER! Like he has for the past 131 years, Punxsutawney Phil kicked off Groundhog Day by emerging from his burrow at Gobbler’s Knob in Punxsutawney, Pennsylvania at sunrise to determine what kind of weather we’ll experience over the next few months. He shared his findings with members of his Inner Circle, who then relayed the information to thousands of people in attendance and even more watching live. The Feb. 2 celebration has gone down in Punxsutawney since 1886.

The Groundhog Day legend states that, if Phil sees his shadow, it will send him running back into his burrow…because a longer winter is on the way. However, if he doesn’t see his shadow, he’ll stick around outside…because spring is coming soon! We’ll have to take Phil’s findings with a grain of salt, though — statistics show that he has only been right 39% of the times he’s made his prediction. Last year, Phil claimed he did see his shadow. In fact, 104 of Phil’s forecasts have predicted a longer winter, while only 17 of his predictions have been for an early spring.

The legend of Punxsutawney Phil states that he drinks a magical groundhog punch every year known as an “elixir of life.” This tacks on seven years to his life with every sip, which is why he’s been able to make his weather predictions for 100+ years. All hail, Punxsutawney Phil!

HollywoodLifers, do you think Punxsutawney Phil’s prediction will be correct this year!? Are you confident in his forecasting abilities?