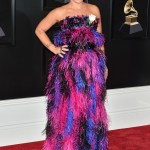 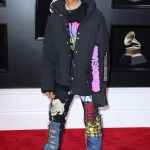 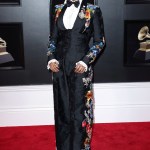 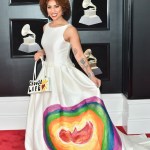 Joy Villa, the woman who wore a ‘Make America Great Again’ gown to the 2017 Grammys, just showed up at the awards show in another controversial ensemble. See the anti-abortion statement dress here.

The 2018 Grammy Awards are finally here, which means that some of the biggest stars in music will be celebrating another year of great work. But the awards show is also an opportunity to show off brilliant designs and impeccable fashion — or not. Joy Villa, 26, decided to turn the red carpet into a conservative statement when she showed up wearing a wedding dress with a rainbow fetus painted onto it. Yeah, she literally walked around with a uterus on her dress. But sporting human anatomy on her gown wasn’t to celebrate women’s bodies — it was actually meant to shame those who choose to have abortions. According to her Twitter, she painted her insane dress herself (Wow, wonder why no designer wanted to make that!) She reinforced her controversial statement with a purse that said, “Choose life.”

Honestly, I can’t say I’m surprised to see the Fox News contributor in such an offensive article of clothing. Not only has she long been vocal about her support of Donald Trump, but at the same awards show last year, she wore a blue gown that said “Make America Great Again” down the front. The short train also had “TRUMP” embellished on it. She was so aware of the fact that people would take issue with the gown that she actually initially covered it with a white capelet dress before whipping it off on the carpet to reveal the ensemble she meant to wear. Too each their own, I guess.

But for those of us who actually care about women, the controversy we should really be discussing is the fact that Lorde, the only woman nominated for Album of the Year, was also reportedly the only person in her category not offered the opportunity to perform solo at the Grammy Awards. Now that’s messed up. Just saying. 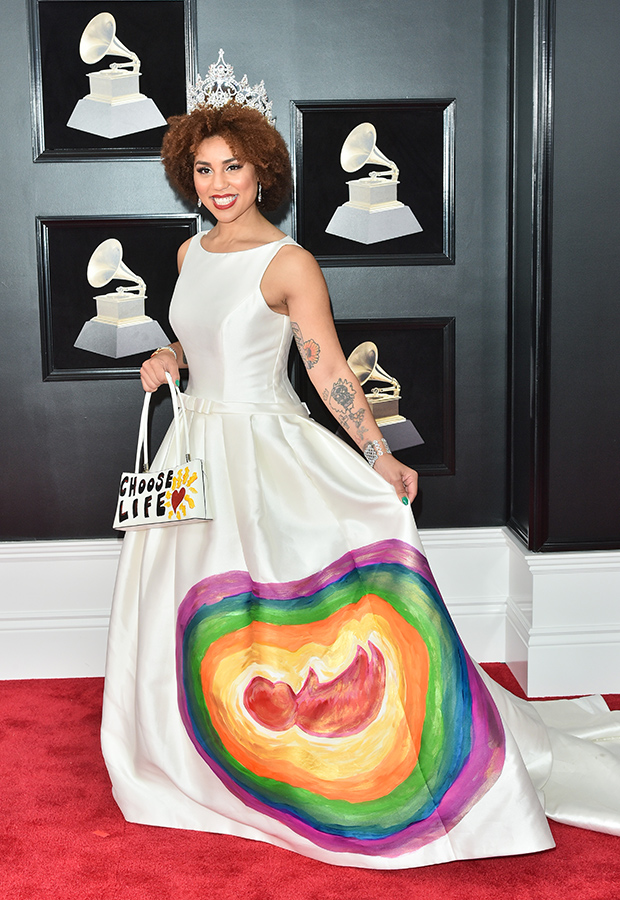 HollywoodLifers, what do you think of Joy’s dress?