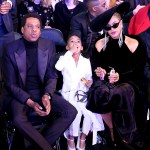 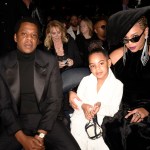 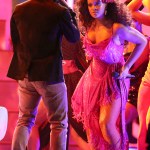 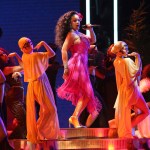 The 2018 Grammys have been graced with Blue Ivy’s presence! Even better, Beyonce & JAY-Z’s oldest child could not have looked cuter. Her look was EVERYTHING!

Blue Ivy Carter, 6, rolled up to the 2018 Grammy Awards looking like total music royalty — and rightfully so! On the arms of her parents, Beyonce, 36, and JAY-Z, 48, the youngster was spotted in the crowd dressed in a fabulous white ensemble, and she owned that front row like it was her job! We could NOT get enough of her adorable look and we love how it complimented Bey’s equally chic outfit. Talk about an epic appearance! Click here to see the 2018 Grammys’ best-dressed celebs.

While Blue wore all white, both her parents rocked all black, so we love how she stood out sitting in between them. To complete her look, the cutie had on glittery silver shoes. She also appeared to be holding a black clutch — what a little fashionista! Meanwhile, Beyonce wore sunglasses inside because, well, she’s Beyonce, complete with sparkly statement earrings, and a fabulously outrageous hat.

We love how confident Blue is in front of the camera. And it’s no surprise she’s such a pro either! After all, the cutie has been in the spotlight her whole life, and this isn’t even the first time she’s walked a red carpet or attended a major awards show. In fact, just last year Blue was at the Grammys and got to watch her mom’s epic performance! She also made a surprise appearance at the 2016 VMAs, and she looked like a real-life princess in a gorgeous sparkly gown worth $11,000! 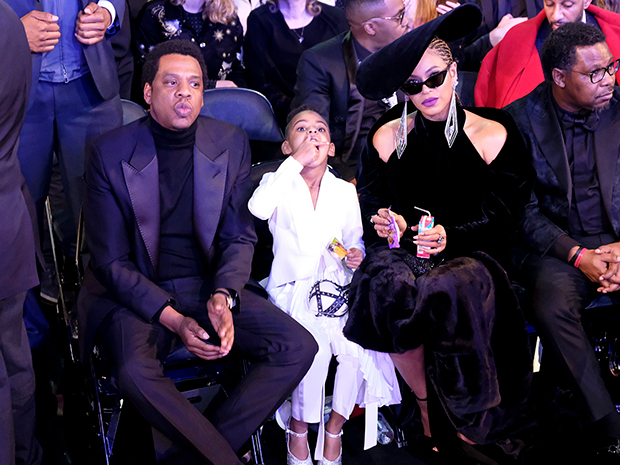 And while Blue is there tonight to support her dad, who’s nominated for eight Grammys, and her mom who’s up for one, the 6-year-old may find HERSELF nominated in the future! Let’s not forget that JAY revealed last year how talented his little girl really is when it comes to music. “Her pockets are amazing,” he said of Blue, talking to BBC Radio 1 about her musical debut on his new album 4:44. “I taped her doing that. She literally did that one time. That was one time, five minutes.”

In fact, JAY even credits Blue to saving his bonus track “We Family.” “So, I’m playing the track and [Blue’s] listening, and she was probably like, ‘Hey Pop, this is how you do it.’ I was like, ‘Forget it,’ so I left her alone, and she climbed up on the stool, put on the headphones, and she just started going,” he recalled. “She was just free styling and she was just finding really good pockets. I was like, ‘Oh my God, this kid!’”

Tell us, HollywoodLifers — do you love that Blue was at the Grammys? What do you think of her cute outfit?