This is one of the most epic Photoshop fails in magazine history. The new ‘Vanity Fair’ cover shows Reese Witherspoon with three legs and inside Oprah has three hands.

With the number of eyes that go over and edit a cover as high-profile as the Vanity Fair Hollywood issue, we’ve got to wonder HOW this major Photoshop fail made it to print. The 2018 main cover shows Oprah Winfrey, 63, seated in a glorious black ball gown with her A Wrinkle in Time co-star Reese Witherspoon, 41, leaning on her armrest next to the Mighty O. Her cream sequin gown has a high left thigh split that shows off her THREE LEGS! Yep, her left leg is positioned straight down to the ground while two different right legs are crossing over it. Both feature the same silver strappy heel, but one is much longer than the other.

As soon as VF debuted the cover on Jan. 25, everyone with working vision could see that Reese has three legs in the pic. Is being next to Oprah so powerful an experience that it can cause someone to grow an extra limb? Even the Big Little Lies star herself had fun with it on Twitter after a fan pointed out the Photoshop fail. “Well…I guess everybody knows now…I have 3 legs. I hope you can still accept me for who I am. ( and I will never apologize for snuggling @Oprah .. if you get the opportunity, I highly recommend it;).” HAH! It’s so great that she’s at least getting a laugh out of it. Even Oprah got in on the fun by tweeting back,” I accept your 3d leg. As I know you accept my 3d hand,” to which Reese told O how much she loves her.

The cover wasn’t the only place where someone had three appendages as Oprah is shown in a behind the scenes pic to have THREE hands! The photo shows her holding onto Reese’s waist like she does on the cover yet she had a second left hand that is clearly on her lap. It looks like the hands on her lap was the natural pose for the photo but somehow someone forgot to erase the extra left hand around Reese. Did something terrifying happen on the A Wrinkle In Time set to make the stars grow extra limbs? It sure is a weird coincidence considering the three panel cover’s other 11 stars have the correct number of arms and legs.

The mag hits news stands on Feb. 6 so we’re not sure if the folks at VF have the chance to go back and correct the mistake or if it has already gone to print. Considering this is retiring Editor-in Chief Graydon Carter’s final issue after 25 years and the spread was shot by legendary Annie Leibovitz, you’d think the people in the photo department would be extra super careful about making the final cover of his reign absolute perfection. 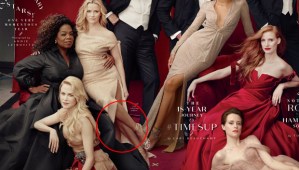 Fans — including Reese — were quick to notice the Photoshop fail:

Well…I guess everybody knows now…I have 3 legs. I hope you can still accept me for who I am. 😃( and I will never apologize for snuggling @Oprah .. if you get the opportunity, I highly recommend it;) https://t.co/6GyrfWxNSY

How does Reese Witherspoon do it all? Well, for starters, she has 3 legs. #VanityFair pic.twitter.com/QD6wAx1Kbw

Reese Witherspoon has 3 legs and still has to lean on Oprah https://t.co/OYAxfGjOms

HollywoodLifers, are you shocked that Vanity Fair has such an epic Photoshop fail on their cover?