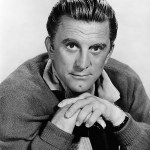 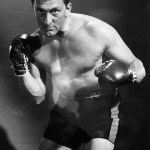 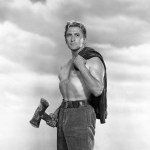 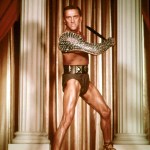 Sharing a super sweet moment with his 4-week-old great granddaughter, Kirk Douglas posed in a multi-generational photo that will melt your heart! Check it out here.

Kirk Douglas, 101, has a lot to be thankful for! Spending time with his beautiful, large family, the iconic actor had the joy of holding the youngest member of the Douglas clan — baby Lua Izzy Douglas, who’s just four weeks old! Lua is the daughter of Kirk’s oldest grandson, Cameron Douglas, 39, and Cameron’s girlfriend Viviane Thibes. The little cutie is absolutely precious, and we just love the photo Cameron later posted to Instagram. Click here to see adorable pics of celeb dads with their kids.

“Words cannot express…. #Powerful #Bloodline,” the proud father captioned the picture of the three generations, which he shared on Jan. 16. But a bloodline isn’t the only thing Kirk and baby Lua share. In fact, the infant’s middle name is actually a tribute to Kirk, who was born Issur Danielovitch, and later went by Izzy. How cute is that? In the snapshot, Kirk smiles as he hold his sleeping granddaughter, and Cameron sweetly has his arms around the star and his hand resting on his baby girl.

The only generation missing from the pic? Cameron’s dad and Kirk’s son, Michael Douglas, 73. Cameron had posted a photo with his dad previously though and uploaded it to Instagram when she was just three days old. That image was captioned, “What it’s all about #Blessed with #Family.” Cameron and Viviane welcomed Lua, their first child together, back in December. It was Michael who revealed the name of his granddaughter, telling People mag, “[We’re] all ecstatic about baby Lua!” 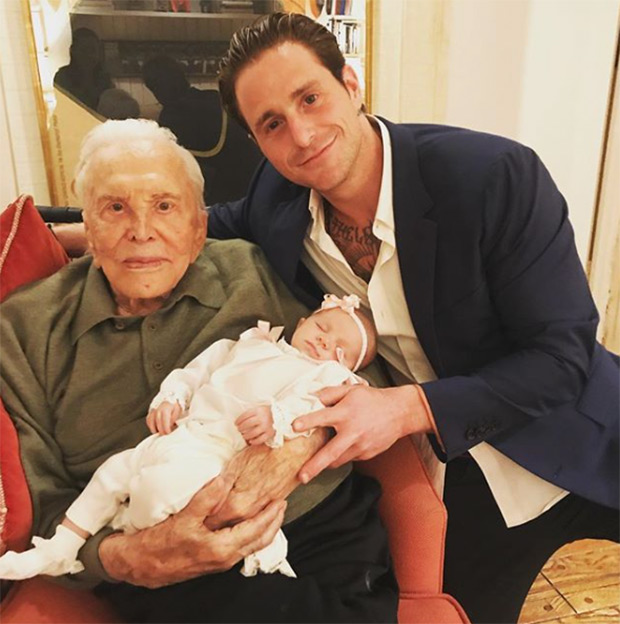 Kirk was most recently seen at the Jan. 7 Golden Globes when he presented the award for Best Screenplay – Motion Picture. Catherine Zeta-Jones, 48, who’s married to Michael, appeared on stage with him. The cutest part? Kirk received a standing ovation from the crowd! In the past, Kirk has been nominated for a Golden Globe three times, and he’s even taken home a win for Best Actor-Drama for his role in Lust For Life in 1957.

Tell us, HollywoodLifers — how sweet is this photo of Kirk with his grandson and great granddaughter? Did you love seeing the 101-year-old at the Golden Globes?