Clutching her doll, Penelope Disick looked beyond adorable for a dinner date with dad Scott & brother Mason. In fact, these cute pics of the 3 are melting our hearts!

Scott Disick, 34, treated his two eldest children, Penelope Disick, 5, and Mason Disick, 8, to a sweet dinner out in LA on the evening of Jan. 9, and we cannot get over the adorable resulting pics! While Mason looked cute in his sporty jacket and fitted sweat pants, there’s no question P stole the show. After all, little Penelope was rocking a super trendy leopard coat with matching furry slides. But the cutest part? She wouldn’t let go of her baby doll! Click here to see adorable pics of the Kardashian kids.

At one point, Scott was even tasked with carrying his daughter’s coat since she was occupied with caring for her toy — SO precious! All three of the Disicks, who were accompanied by a bodyguard, were dressed casually, with Penelope in a white sweatsuit, Mason in a tee and sneakers, and Scott rocking a hoodie and jeans. They also had to brave the rain for their outing! There’s no question Scott and Kourtney Kardashian‘s, 38, kids enjoy the high life. After all, their dinner date with dad came just a day after Mason and Penelope hung out with Kourt for a lavish day of R&R.

Taking to Instagram on Jan. 8, Kourtney shared a photo of Penelope and her youngest child, Reign Disick, 3. The reality star and her little ones were all wrapped up in matching white robes, and she captioned the image, “squad spa day.” How cute is THAT? Although Scott and his relationship with 19-year-old Sofia Richie has been heating up quickly, we love how he still spends quality time with his kids. 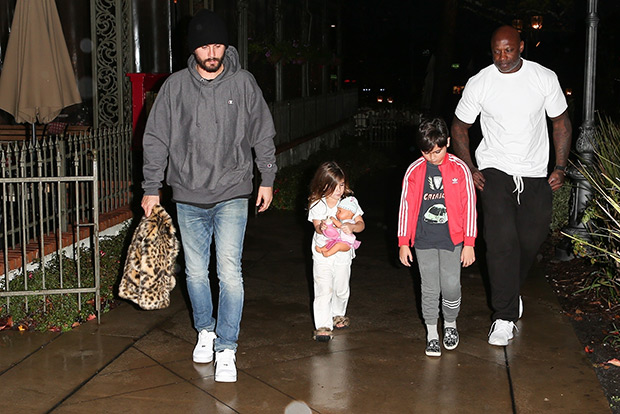 To ring in the new year, Scott and Sofia took a romantic trip to Aspen. An eyewitness even told E! News that their PDA was off-the-charts during the special vacay! “They walked around a lot holding hands and snuggling up in the cold,” the source revealed. “They were very playful together and at one point Sofia stopped to sit on a spinning seat in a park. Scott spun her around in circles so she got dizzy and he had the biggest smile on his face. They took pictures together with their phones and always seemed to be having a lot of fun.” Aw!

Kourt, on the other hand, is not a fan of Scott’s teen GF, and even reportedly “banned” her from attending the family’s holiday festivities. One of the reasons Scott ended up going all out for Sofia in Aspen was to prove to her he’s officially over Kourtney and that he doesn’t care what she has to say about his new relationship.

Tell us, HollywoodLifers — how adorable are these pics of Penelope and her fam? Do you love seeing Scott with his kids?