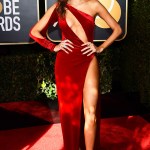 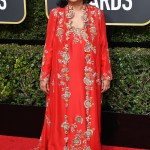 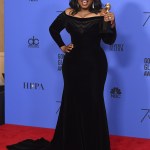 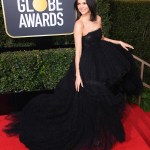 Debra Messing just went there at the Golden Globes. At E!’s first red carpet since Catt Sadler quit over pay inequality, Debra said she was disappointed with the network and Catt deserved to get paid fairly!

“I am wearing black to thank and honor all the brave whistleblowers that came forward to share their stories of assault and discrimination,” Debra Messing said while speaking to E!’s Giuliana Rancic, 43, while on the red carpet of the 2018 Golden Globes. “I’m wearing black to stand in solidarity with my sisters…We want diversity, we want intersectional gender parity, we want equal pay. I was so shocked to hear that E! doesn’t believe in paying their female co-hosts the same as their male co-hosts. I mean, I miss Catt Sadler and so, we stand with her. And that’s something that can change tomorrow.”

Give it up for Debra for having the boldness to do that to Giuliana’s (and E! Entertainment’s) face. She wasn’t the only one who brought up Catt during the evening. Eva Longoria, Reese Witherspoon, Sarah Jessica Parker and Nicole Kidman also brought up the ex-Live on The Red Carpet co-host while being interviewed by Ryan Seacrest.

Clearly, these women were still upset with what happened to Catt, 43.  After twelve years at E!, Catt signed off for the last time on Dec. 19, according to the Washington Post. She later revealed on her personal blog why, claiming that the company was paying her half as much as her E! New co-host, Jason Kennedy. “I have two decades experience in broadcasting and started at the network the very same year as my close friend and colleague that I adore…But how can I operate with integrity and stay on at E if they’re not willing to pay me the same as him? Or at least come close? How can I accept an offer that shows they do not value my contributions and paralleled dedication all these years?”

“How can I not echo the actions of my heroes and stand for what is right no matter what the cost? How can I remain silent when my rights under the law have been violated?” On average, American women make 80 cents for every dollar men make, according to The New York Times. Catt’s decision received love from Jessica Chastain, Olivia Munn and former E! News host Maria Menounos.

Debra Messing drags E! (while being interviewed on E!): "I was so shocked to hear that E! doesn't believing in paying their female co-hosts the same as their male co-hosts" pic.twitter.com/HF3B2uhwtF

YO DEBRA MESSING CALLED OUT E! FOR NOT PAYING CATT SADLER ENOUGH WHILE BEING INTERVIEWED ON E! 👏🏻👏🏻⚰️⚰️ #GoldenGlobes

damn, Debra Messing actually just uttered the words “intersectional pay parity” live on national television *and* called out E! for their Catt Sadler bullshit in the process. sooo extremely annoyed i have plans tonight and will miss the majority of the #GoldenGlobes.

“If these women celebrities and non-celebrities alike want to have these conversations on a huge scale for the world to watch and there can be some element of change that comes as a response to that, then that’s the kind of TV I would love to make,” Catt said. Coincidentally, equal pay is one of the facets of the Time’s Up initiative, and the movement was in full force at the Golden Globes. Reese Witherspoon, Eva Longoria and more women dressed in black as a silent protest of pay inequality and sexual harassment.

What do you think about people ignoring E!, HollywoodLifers?