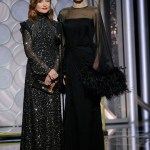 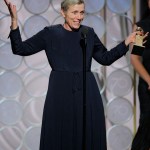 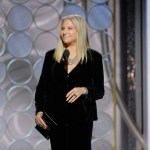 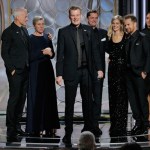 Did that really happen? Alexander Skarsgård was having a killer night at the 2018 Golden Globe Awards on January 7…until disaster struck. Okay, that might be a little dramatic, but still, it was a major mishap! Alexander messed up his speech while accepting the Golden Globe award for Best Performance by an Actor in a Supporting Role in a Series, Limited Series or Motion Picture Made for Television, for his role on Big Little Lies. It would’ve been a blink and you’ll miss it moment, until he drew major attention to it.

Alexander accidentally thanked only cast member Nicole Kidman by name, and not the other women who carry the show. Whoops! Don’t worry, though; Alexander knew what was going on as soon as it slipped out of his mouth. He looked out at the audience and quickly caught himself, saying that he loved all the other women in the cast — Reese Witherspoon, Laura Dern, Zoe Kravitz, Shailene Woodley — and gave them a nice tribute. “I am here tonight because I had the privilege of working with an extraordinary group of women,” he said.

“[I want to thank] our extraordinary cast, who are all here, especially Nicole.  Hi.  Not that you’re, like, more talented than the other girls.  I say “especially Nicole” because most of my scenes were with Nicole.  You guys are amazing.  Nicole, I love you.  Thank you for making this the greatest experience of my career,” he said in his acceptance speech.

That’s sweet! More people actually had a problem with the fact that his character on Big Little Lies is a serial abuser and rapist, but he didn’t address anything in his acceptance speech about Time’s Up, #MeToo, or the general movement in Hollywood right now against the rampant harassment and assault women face. What a wasted opportunity!

HollywoodLifers, were you shocked by Alexander’s accidental diss, or do you think it was no big deal? Let us know!