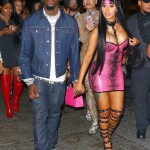 Cardi B and Offset aren’t going to be ringing in the new year together. A source close to Cardi EXCLUSIVELY told HollywoodLife.com the surprising reason why!

Amid all the crazy baby mama drama, Cardi B, 25, and her fiance, rapper Offset, 25, are spending New Year’s apart — but it’s not because some Instagram model is accusing Offset of fathering her unborn child. According to a source close to Cardi B who EXCLUSIVELY gave us the deets, when it comes to their New Year’s Eve separation, it’s business, not personal. “Cardi B and Offset aren’t spending New Year’s Eve together, she’s disappointed, but it’s for a good reason because they’ll both be making money,” our source said. “Migos has a show in Denver, and Cardi’s got a show in Queens. She’s doing the countdown and then performing at 1 am so there’s no way around being apart. They’re planning to celebrate together on New Year’s Day instead.” So, their separation is only due to the fact they’re both working musicians, but they are going to have a lot to talk about on New Year’s Day.

Offset’s alleged baby mama Celina Powell told us in an EXCLUSIVE interview that not only has she been ignored by Offset when trying to tell him about her baby, but she’s been blocked by Cardi as well. Despite claims by another rapper that he’s the father, Celina says she’s “1,000 percent” positive the baby is Offset’s. She has to be if she’s actually going to serve him papers demanding a DNA test to prove he’s the father.

Recently, Cardi B gave Offset a stern ultimatum in the middle of a concert, saying that if he ever cheats on her, she’s “gon’ lose his wife.” Hopefully, for his sake, the DNA test will show that he’s baby-free. Click here to see pics of celebs, including Cardi, who wore over-the-top ball gowns in 2017.

HollywoodLifers, do you think Cardi and Offset can make their relationship work in 2018? Let us know your thoughts in the comment section below.