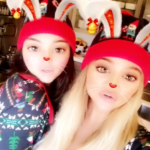 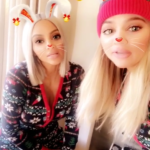 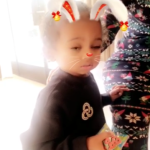 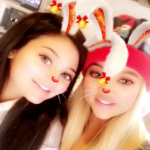 In Khloe’s snap of the kids getting ready to open their Xmas gifts, everyone whips out their phones to capture the cuteness. Is that a pregnant Kylie in the lower right corner?!

Kylie Jenner, 20, is that you?! Khloe Kardashian, 33, documented the fam’s Christmas morning on Snapchat Dec. 25, but some fans think she accidentally included a pregnant Kylie in one of the snaps. “You can definitely see Kylie’s preggo belly on [Khloe’s] snap chat…bottom right with the red nails,” one fan commented on Instagram. The first figure in the snap is likely Kim, due to the blue slippers. As for the second? Hmm!

While it’s not 100% clear whether it’s Kylie or not, it’s worth pointing out that that none of the other sisters were rocking red nails that day, so it can’t be one of them, and the hands are definitely too young-looking to be Kris Jenner, 61, or another family member! So did Kylizzle accidentally debut her baby bump, thanks to Khlo? Or is it another family member wearing the PJs, which are just a bit unforgiving?

It’s also worth pointing out that Kylie’s only full-on appearance on Khloe’s Snapchat was from the neck up, and she was wearing a white top, rather than the pajamas, as she wished fans a Merry Christmas. “A wild Kylie was spotted on Khloe’s Snapchat [and] she wasn’t wearing the festive pjs,” another fan tweeted. “Is it because they’re too small because there is a belly involved…? Stay tune[d] and hopefully we’ll find out!”

Well, it’s possible that Kylie changed into the pajamas. We’ll probably never know for sure unless more photos surface later on!

HollywoodLifers, do you think Kylie is the woman with the red nails in Khloe’s Snap? If not, let us know who you believe it is!