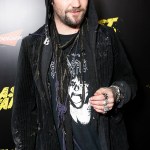 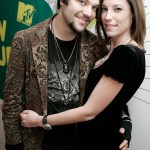 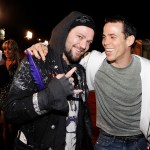 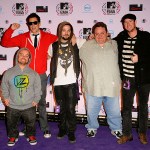 Congrats are in order! Bam Margera is over the moon since he’s officially a proud papa to a healthy baby boy. The ‘Jackass’ star shared a precious pic of his bundle of joy on Dec. 23!

And a baby makes three! Bam Margera, 38, grew up in front of our very eyes and now the former television star is officially a dad. We’re not crying, you are. His stunning wife, Nicole Boyd, recently gave birth to their first child and the Jackass star took to Instagram on Dec. 23 with the heartwarming announcement about their new addition. Sharing a sweet photo of his longtime love snuggled up to their bundle of joy, Bam revealed his child’s super unique moniker: “Phoenix Wolf.” The skateboard pro is clearly elated about meeting his healthy son and building brand new memories as a family. Bam’s father Phil could even be seen smiling in the delivery room wearing a bright red Santa Claus suit. What a gift! Click here to see adorable pics of celeb moms with their kids.

Bam and his loved ones are about to enjoy one of the most magical holidays together! The couple revealed they already knew what they were going to name their son, since it received so much positive feedback. “I said it and everybody liked it, so we stuck with that,” the former Viva La Bam star told PEOPLE in Sept. 2017, adding that the moniker had “just kind of followed” them around. His son’s name even has a symbolic meaning, as Bam first met his wife at the Phoenix Theater in Petaluma, Calif., where his brother’s band was performing. The group’s 2017 album was also titled The Phoenix. Bam and Nicole are still going strong, four years after tying the knot in Iceland!

The former television star is still getting used to fatherhood, but he’s hoping to spend some time relaxing with his wife and son back home in Spain. As far as the future goes, Bam revealed: “It’ll be fun teaching him how to skate,” he told PEOPLE. “I have mixed feelings about teaching him my stupid Jackass stunts. I was really nervous at the beginning, but now I’m getting used to it,” he admitted about becoming a first-time doting daddy. “I’ve had a lot of help from my mom and dad. My brother has five kids already.” Cheers to this amazing new chapter in life!

HollywoodLifers, can you believe Bam is a father? Tell us, below!