Nothing about this looks good. Travis Scott, 25, was spotted at “Crazy Girls” strip club in Hollywood with a group of friends on Thursday night [December 22]. The rapper partied it up inside the popular nightclub according to reports, and his rumored pregnant girlfriend, Kylie Jenner, 20, was nowhere in sight. Not to mention, Kylie’s reported due date is quickly approaching. See the photo, below.

The photographs emerged on the same day Travis dropped his new track, “Best Man”, which seems to be an ode to his girlfriend, Kylie. “My girl got that ass, she a Texan,” Travis raps on the song, which also features, Migos member, Quavo, 26. The track of off their new joint album, Huncho Jack, Jack Huncho, which also dropped on December 22. The 13-track record also includes features from Quavo’s fellow Migos members Takeoff, 23, and Offset, 25.

Back to Kylie and Travis — So, if there really trouble in paradise? Its’ hard to tell since the couple — who has yet to confirm Kylie’s reported pregnancy — is so private. In fact, Kylie has yet to make a single public appearance since the baby news broke on September 22; just days before we learned her big sis, Khloe Kardashian, 33, is expecting her first child with boyfriend, Tristan Thompson, 26. 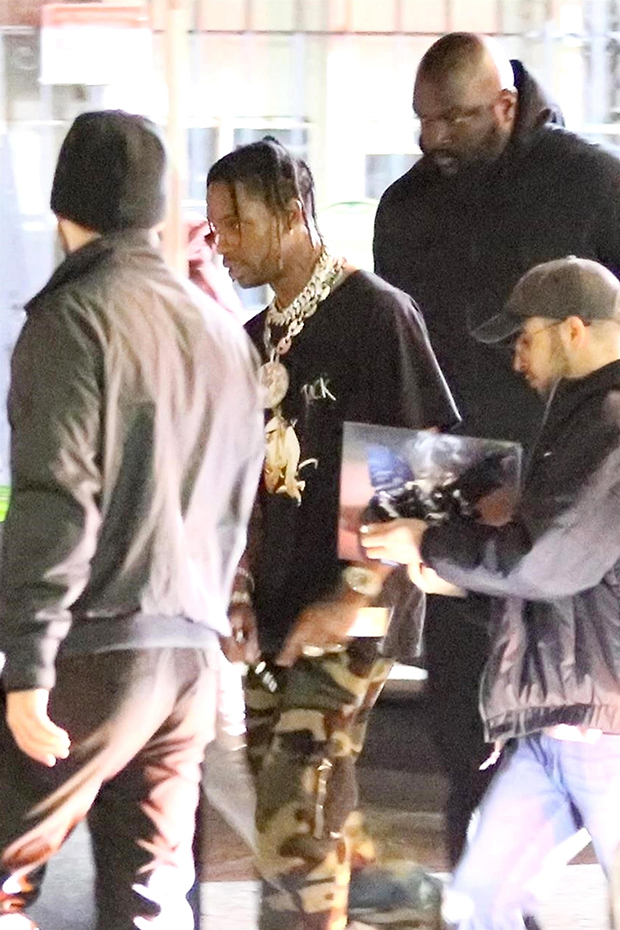 While the details of Kylie’s alleged pregnancy remain under wraps, it’s been reported that she is expecting a baby girl. Fans of the lip kit mogul believe she’s been hinting at the baby’s gender for months with social media posts containing the color pink; like he pink Christmas tree, nail color and more subtle photos. And, speaking of social media, the queen of Instagram, has significantly downplayed her social use since the baby news broke. Kylie has also been posing from the chest up in new photos, as well as posting old photos of herself. Not to mention, she’s has yet to appear in this season of Keeping Up With The Kardashians. As the Kardashians continue to debut their “25 days of Christmas” cards leading up to the big reveal, some fans think Kylie may debut her apparent baby bump on December 25.

It’s not a far cry since Khloe just debuted her baby bump on Instagram on December 20. “My greatest dream realized! We are having a baby!” Khloe wrote next to a black and white photo of Tristan’s hands wrapped around her baby bump. Khloe went on to explain how “God had a plan” for her and Tristan, before thanking her baby daddy. Click here to see Khloe’s baby reveal!

HollywoodLifers, do you think Travis Scott and Kylie Jenner will last?