Well, that’s a wrap for ‘Teen Mom 2’ stars Kailyn Lowry and Javi Marroquin. Even though he presented her with a new ring during the season finale of ‘Marriage Boot Camp’, she served him with divorce papers.

Javi Marroquin was hoping to give his relationship with Teen Mom 2 star Kailyn Lowry another try, but when he presented the mother of his child with a new ring during the Dec. 22 season finale of Marriage Boot Camp, she said it was time they broke up and moved on with their lives. Sad, right? Unfortunately for Javi, that wasn’t even the worst of it. After shattering his heart into a million pieces, Kailyn served Javi with divorce papers as tears streamed down his face. “Javi, you’re the father of my son,” she said. “You’re a hard worker. I know at one point we were in love, but I just don’t feel like we’re there anymore.” Ouch!

This, of course, came immediately after Javi confessed his love for Kailyn. “This experience has been a crazy ride,” he told her, as they stood on a stage surrounded by white flowers, which resembled a wedding. “It makes me think of our wedding and just brings back old memories I guess. But until we understand each other and communicate, we’re not going to work out.” Even so, he presented her with a ring, meaning he wanted to move forward with her and give their romance another shot. But she had another idea in a mind — one final split. 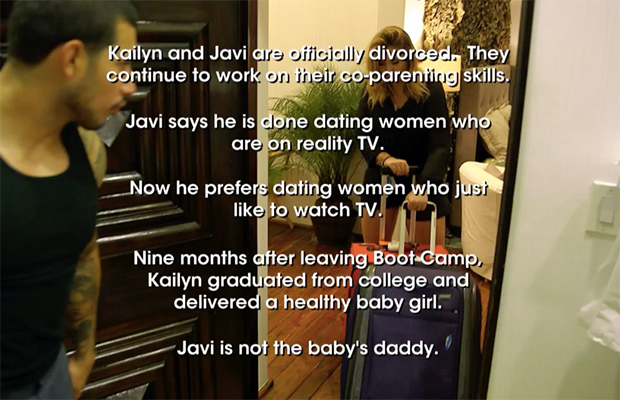 So because of that, Javi and Kailyn left the Marriage Boot Camp house as two single people. Words flashed across the screen saying, “Kailyn and Javi are officially divorced. They continue to work on their co-parenting skills. Javi says he is done dating women who are on reality TV. Now he prefers dating women who just like to watch TV. Nine months after leaving Boot Camp, Kailyn graduated from college and delivered a healthy baby girl. Javi is not the baby’s daddy.” We’re happy they provided us with an update, but was the person who provided the update half asleep? Kailyn gave birth to a baby BOY (not a girl), and he’s now dating another reality star — Teen Mom 2 star Briana DeJesus. So there was a lot of misinformation given to viewers during the season finale. Such a shame…

HollywoodLifers, what did YOU think of the season finale of Marriage Boot Camp? Were you happy with the romantic outcomes? Tell us below!