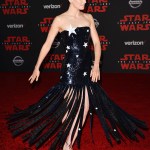 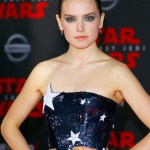 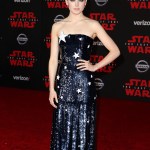 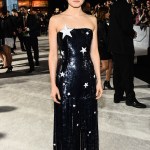 As if women here on earth weren’t already taking down villains with their powerful #MeToo movement, now you can see them ruling the universe in the latest ‘Star Wars’ episode. And you will be stoked!

All hail to Rey (Daisy Ridley), the determined, young woman/Jedi who leads the charge in the new Star Wars: The Last Jedi. We pick up just where we left off with the last Star Wars installment, The Force Awakens on the beautiful, lonely remote island where Rey has tracked down the mysteriously disappeared Luke Skywalker (Mark Hamill). What Luke has been doing all this time while his courageous sister, Princess-turned-General Leia, has literally soldiered on, commanding the Resistance forces fighting against the evil Nazi-like First Order, is a big question.. Has he been standing in his cloaked hoodie all day, every day just staring from his mountain top into the ocean below? It sure seems that way. And, it turns out that he hasn’t even taken his free time to read all the ancient Jedi texts stored in his hideout..

You’d think Luke would be thrilled to have a visitor like the eager Rey… but no. It takes days of hanging out and sleeping in the cold before Skywalker finally agrees to give the young Jedi some instruction. If I were Leia ( Carrie Fisher), I’d be more than a little pissed about my twin deserting me again and moping around while I was trying to save all the goodness in the universe from the ever-growing evil — especially when my only child — a son, Kylo Ren ( Adam Driver)– has crossed over to the dark side and then murdered the love of my life (and his own dad), Han Solo (Harrison Ford). But, Leia (Carrie Fisher) is literally a saint — appearing in one scene that now seems like a premonition — in otherworldly all-white. So, instead of seething with resentment like any normal abandoned sister would do, she is just desperate to connect with him.

As the film unfolds, we finally learn why Luke got all moody and became a hermit. We see Rey go from strength to strength as she learns how to harness and use her Jedi power. And we also watch as the emotional and psychic connection between Rey and Kylo Ren continues to grow. Just as Luke and Leia were drawn to each other, finally discovering that they were the twin children, separated and hidden from their father Darth Vader, we all know that Rey and Kylo Ren have some deep bond that enables them to see each other and to care about each other and be inexplicably drawn to each other. But what is it?

In between the Luke and Rey and Rey and Kylo Ren bonding scenes, there is tons of action as the far outnumbered Resistance fighters are mercilessly hunted down by the First Order’s Supreme Leader  Snoke (Andy Serkis) and his General Hux (Domhnall Gleason). They, as always, use their quicker wits to keep evading Snoke’s “Final Solution,” as they hop scotch over the universe.

In a side plot, Finn (John Boyega) and a smart, spunky Rose (Kelly Marie Tran) have their own big adventure as they take on a mission to find the top code cracker in the cosmos (Bernicio del Toro) and then break into the First Order’s massive space craft. Rose adds to the already formidable female power leading the fight against the First Order, and like Leia and Rey, is a beacon of energetic light that confounds the First Order.

By the film’s conclusion, there’s no question but that Princess/General Leia has found a worthy successor in Rey. Like Leia, her goodness is unwavering despite multiple tests and her Jedi powers could prove to be even more powerful that Luke’s. But, of course, we’ll have to wait until the next film episode to find out so much more about many, many mysteries. Who are Rey’s parents? What is her tie to Kylo Ren and why can’t these two quit each other? Why did Kylo go to the dark side like his grandfather, Darth Vader, and can he still come back?

Stay tuned! HollywoodLifers, do you plan to go to Star Wars: The Last Jedi? Let me know!