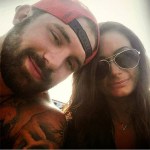 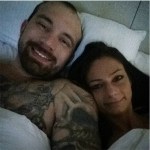 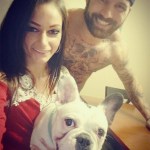 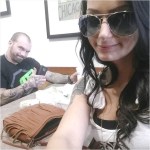 Chelsea Houska’s baby daddy Adam Lind has been arrested yet again, this time for violation of a no contact order by his ex GF after she accused him of domestic assault.

Thank goodness Chelsea Houska, 26, got away from her ex Adam Lind because he is nothing but trouble. The 28-year-old  — who is the father to the Teen Mom 2 star’s daughter Aubree, 8 — is sitting in a Minnehaha County, SD jail. He’s accused of violating a no contact order following his Nov. 2 domestic assault arrest against ex-girlfriend, Stasia Huber. Oh man, some people just don’t learn. Radar Online reports that the troubled ex reality star was arrested on Dec. 5  in “violation of conditional bond no contact in domestic arrest,” so it’s back to jail for him. He’s being held with no bail and will make an appearance before a judge on Dec. 6.

Adam has already spent time behind bars within the last month for an alleged attack on Stasia that left her with a broken arm! “While under the influence of drugs, alcohol, and steroids, he fractured my forearm, locked me in the house saying I couldn’t leave, smashed my phone and once he realized what he had done, he broke down crying and took me to the ER. We broke up for a while after that,”she claimed in court papers that the site obtained. The alleged attack occurred on Nov. 2 and five days later Stasia got an order of protection for him to stay away from her. Obviously he didn’t abide by it cause now he’s back behind bars.

This is just another of Adam’s many woes. He has a second child by ex Taylor Halibur, and she’s gone to court to try to get his time with their daughter Paislee reduced after he failed a routine drug test just over a day before he was supposed to parent the little girl. Radar reported that he had a “substantial amount” of meth in his system according to court docs. We saw that drama actually play out on Teen Mom 2 when Chelsea told a producer that Adam failed a drug test for both methamphetamine AND amphetamines. The reveal came after he tried to get his child support payments for Aubree lowered.

HollywoodLifers, do you think the judge will keep Adam in jail now that he’s violated the no contact condition of his prior release?