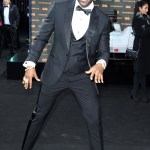 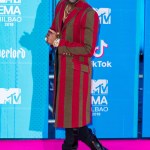 Jason Derulo gave the Thanksgiving Day football audience quite a show as the halftime performer at the Lions vs. Vikings matchup. Unfortunately, he didn’t bring his A-game and the audience booed him!

The battle for the top of the NFC North division went down on Thanksgiving Day between the Minnesota Vikings and the Detroit Lions, and the highlight of the game was Jason Derulo‘s  halftime performance! The 28-year-old kicked things off with  his hit “Talk Dirty To Me” then segued into “Love Like That,” but his heart didn’t really seem into it. His dance moves were okay, but he was a sweaty mess and relied heavily on his background track. By the time he got to his massive single “Want To Want Me” he just looked like he wanted the whole thing to be over, and Twitter took notice.

His performance was absolutely savaged on social media. This is SO sad because Jason is so darned talented and normally is an electric live performer. He just didn’t bring it and fans noticed big time. He got booed by the audience at the end of his set. Yeah, Detroit fans can be harsh, but they clearly expected better of him.

The Vikes went into the game atop the NFC North with an 8-2 record but the Lions are in the chase at 6-4. This is a game that will help decide who owns the division and makes the NFL playoffs so a lot was on the line. Detroit had home field advantage and that can sometimes go a long way into who wins the game. It was the first of three epic NFL Thanksgiving day games and next up is country star Thomas Rhett, 27, who will be performing at the Dallas Cowboys vs. LA Chargers game that follows the Minnesota vs. Detroit game. Hopefully he has a better reception than Jason did in Motor City.

Man, Jason Derulo out here sounding like me in the shower.

Something tells me that Jason Derulo put the Lions to sleep. #MINvsDET #ThanksgivingDay #NFL

When ur beer guy is better than Jason Derulo #OnePride pic.twitter.com/PDEdnJ6dmK

HollywoodLifers, what did you think of Jason’s performance?