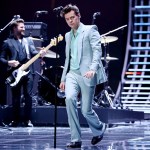 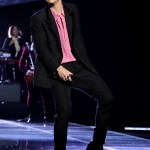 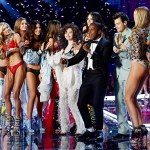 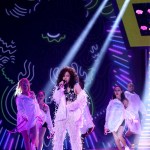 You haven’t lived until you’ve seen Harry Styles’ dance moves at the Victoria’s Secret Fashion Show! Check ’em out here and see why we’re LOLing so hard (in the best way possible).

We won’t get to see Harry Styles’ full performance at the VS Fashion Show until it airs on Nov. 28, but for now, we’ll have to live with these epic videos shot by audience members in Shanghai. In various clips, Harry can be seen busting out some killer dancing during his performance, even getting quite out of control at times! Some fans referred to his moves as “dad” or “grandpa” dancing, and sure, he did look a bit awkward at moments, but we just love that he was getting so into it! The former One Direction singer sang his hits “Kiwi” and “Only Angel” during the show, as the gorgeous models strutted past him on the catwalk.

Along with Harry, Leslie Odom Jr., Miguel and Jane Zhang hit the runaway to sing, as well. As we previously reported, there were a lot of issues nailing down performers, as Katy Perry was reportedly set for the bill, but couldn’t attend the show because she’s allegedly been banned from China. It was also previously rumored that Taylor Swift might have been a performer, although that never panned out. However, based on the models’ social media, it appears the show was totally epic, and we can’t wait to see it all play out when it finally hits our television screens!

Watch the videos below to check out Harry busting his moves during his VS Show performance. Hey, we can’t blame him for maybe feeling a little awkward…after all, he had to perform in front of THREE of his model exes at the event! The fashion show airs on Nov. 28 at 10:00 p.m. on CBS.

Are #HarryStyles grandpa dance moves amazing or are they AMAZING? That and more behind-the-scenes #VSfashionshow action can be found at the link: https://t.co/gAtpbEVWNK pic.twitter.com/YWQqnvBojP

HollywoodLifers, what do you think of Harry’s dance moves?!