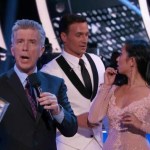 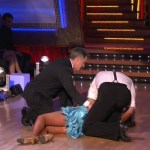 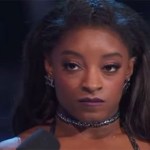 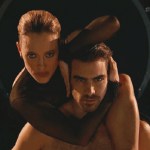 Over the years, ‘Dancing With the Stars’ has had its fair share of shocking moments. From Ryan Lochte being ambushed by protestors to shocking eliminations, these are ‘DWTS’ moments we’ll never forget.

As the season 25 finale of Dancing With the Stars nears, it’s time to take a trip down memory lane. DWTS is no stranger to jaw-dropping moments, and the show continues to bring the surprises every year. The season 23 premiere got off to a rocky start when Ryan Lochte, 33, and Cheryl Burke, 33, hit the dance floor, and it wasn’t because of their dancing. Ryan and Cheryl were awaiting criticism of their foxtrot when two men rushed the stage in protest of Ryan’s appearance. The shocking moment stemmed from the controversy at the Rio Olympics. Ryan had exaggerated a story about being held at gunpoint at a Rio gas station. The DWTS ambush definitely shook Ryan and Cheryl up, but they continued on in the competition.

The pros and celebs on Dancing With the Stars have had some serious wardrobe malfunctions over the years. When you’re dancing like these people are, anything can happen. In season one, General Hospital star Kelly Monaco, 41, nearly flashed her breasts when her bodice strap broke. Fortunately, Kelly managed to keep everything hidden until the dance was finished. While wearing a bustier under a sheer, lace top, Sharna Burgess, 32, suffered a nip slip while performing with partner Antonio Brown, 29. Despite the embarrassing moment, Sharna handled it like a pro.

There have been so many more shocking DWTS moments. From Marie Osmond, 58, fainting on live TV to the shocking eliminations of Heather Morris, 30, and Sabrina Bryan, 33, DWTS is always keeping us on our toes. The Dancing With the Stars season 25 finale airs Monday, Nov. 20, and Tuesday, Nov. 21, on ABC.

HollywoodLifers, what do you think is the most shocking DWTS moment of all-time? Let us know!