Christina Aguilera, 36, just can’t catch a break. On top of the hot and cold critiques about her AMAs performance, the singer is now at the center of lip injection accusations. After she took the stage to perform an emotional medley of hits from Whitney Houston’s iconic film, The Bodyguard, in honor of its 25th anniversary, fans took notice to her fuller lips. Twitter flooded with inquiries about Xtina’s lips, with fans accusing her of undergoing plastic surgery, botox and lip fillers. Fans continued to express their disappointment in the singer, who they’ve followed since day one and said they “cannot recognize her anymore.”

Christina, in a stunning, black satin suit dress,  belted out Houston’s “I Will Always Love You,” “I Have Nothing” and “Run to You” as well as “I’m Every Woman.” The camera panned to audience members who were overcome with emotion as Christina paid tribute to the late singer. However, there were some who thought Christina wasn’t the best choice for the gig. Fans offered up other artists, who they felt should’ve taken the reigns on the tribute, such as Ariana Grande, 24, and Jennifer Hudson, 36. Despite the mixed emotions, Christina was very happy with her performance. She took to Instagram after the show to post a photo of her laying in bed, with the caption, “still reeling.”

Christina went for a more fresh face than her usual smokey and red lip combo. She rocked slicked back hair, with light eyes and a pale pink lip. And, while some fans slammed her look, others loved her au naturale makeup. But, you can decide. Check out her full beauty below, and see the fans tweets questioning her “new look.” 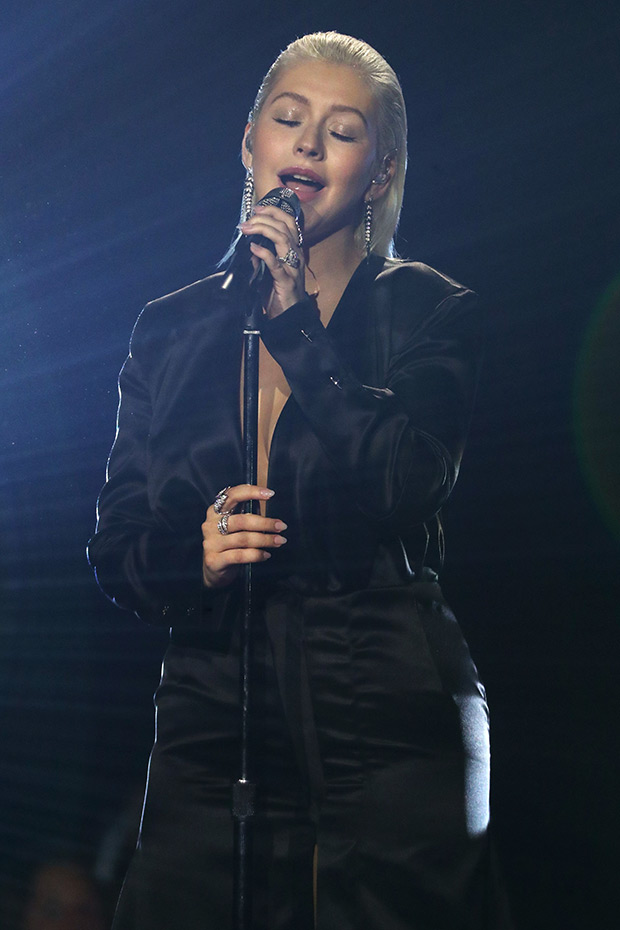 Check out some fans who are questioning Christina’s plumper pout!

Christina Aguilera is a beautiful woman with a spectacular voice but PLEEEZE girl, stop messing with your lips. So distracting.

christina aguilera totally got botox on them lips 👄

HollywoodLifers, what did you think of Christina’s look?