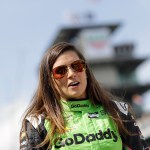 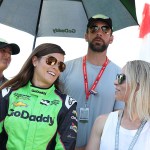 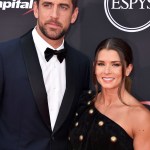 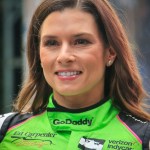 It’s the end of an era: Danica Patrick is retiring. With tears in her eyes, the most successful woman in American open-wheel racing said she’ll hang up her helmet after taking one last shot at the Indy 500.

Danica Patrick, 35, announced the end of her career at an emotional press conference on Nov. 17, according to the Associated Press. The only woman to take the checkered flag in an IndyCar Series race had to pause sever times to fight back tears, revealing that after months of deliberation, she realized her time on the track is over. Yet, she’s still going to give herself a shot at winning two of the biggest races in the world: The Daytona 500 and the Indianapolis 500.

“Nothing that was being presented excited me, then about three weeks ago, I just blurted out, ’What about Indy? Let’s end it with the Indy 500,’” she said during the press conference. “This ignites something in me. But I am done after May. Everyone needs to put their mind there. My plan is to be at Indy, and then I’m done.” Danica even dubbed these last two races of her career as “the Danica Double.”

It’s unsure how she’ll race in the Daytona 500, as she recently lost her NASCAR Cup ride at Stewart-Haas Racing to Aric Almirola, but there will be someone willing to give her a shot. As for Indy, Chip Ganassi Racing will likely give her a ride, since the team has room to field additional cars for the race. Danica joined NASCAR in 2012, leaving IndyCar behind to compete in America’s top stock car racing series. Her decision to end her career at Indy will be a huge homecoming for her.

“I know I always said I’d never go back to Indy, and I was always being honest,” she said at the press conference. “Well, things change. I know now you can never say never. I’d been going through this in my head and kept asking myself, ‘How am I going to get the words out and say it’s over?’ And trust me, I lost my (stuff) a few times over that. But this seems right, and this seems good.”

Danica became the first (and so far, only) woman to win an IndyCar race when she claimed the 2008 Indy Japan 300. Her third place finish at the 2009 Indianapolis 500 is the highest finish by a female driver. She wasn’t able replicate the success in NASCAR. She wasn’t able to win a race, but her eighth place finish at the 2013 Daytona 400 is the highest finish for a woman. Following her retirement, Danica said she would focus more on her California winery, her line of athletic wear and her exercise and fitness program.

HollywoodLifers, are you sad that Danica’s retiring?