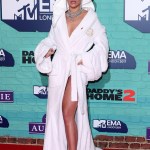 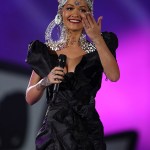 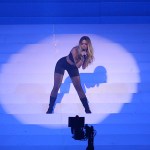 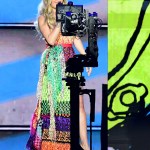 She’s the hostess with the mostess — outfits, that is! Rita Ora rocked no less than FOURTEEN looks at the 2017 MTV EMAs, and you can bet some of them were pretty outrageous…like that bathrobe!

Rita Ora, 26, hosted the MTV Europe Music Awards at The SSE Arena in Wembley, London, United Kingdom on Nov. 12, and there wasn’t a moment when she didn’t look absolutely stunning! From the moment she stepped out on the red carpet, we knew we were in for an evening of outrageous, incredible outfits.

The “Your Song” singer is known for changing up her look (and her outstanding vocals), and now she’s proved that she can really pull off any look! First, she wore a towel and bathrobe on the red carpet — yes, you read that right. She looked like she’d just emerged from the shower, except for the diamonds around her neck and a pair of dazzling stilettos! (It was all part of an opening bit, but still wild.) See pics of Rita Ora in Avicii’s new music video.

The second time we saw Rita, she was properly glammed up in a multicolored, sparkling sequin strapless gown. So gorgeous! See more photos from the 2017 EMAs red carpet.

Next, Rita rocked a yellow fur coat with sexy patterned separates, then changed into a multicolored minidress layered over a black sheer top. Super hot! Of course, she also performed at the big show, donning an all-black outfit. After shedding her black blazer, she put her perfect abs on display in a crop top!

Then, just when we thought that we’d seen it all from Rita, she caught us by surprise with the popstar version of a “maintenance” outfit for another pre-recorded sketch. It included a pink off-shoulder top, yellow utility belt and pink ponytail tie! When she appeared on stage again, she appeared to be wearing a gardening pitchfork around her black dress. Okay, then…

Rita later went full on Muppet-chic in a purple feathered robe and coordinating purple gown. Later, there was a hot black leather outfit that sadly only got a few seconds of screentime, as well as a more questionable khaki outfit with a golden headpiece and black fringe and a pair of sparkly blue pants with a red and white flag-like top. Oh, and can we talk about that grey jacket, red plaid dress and matching bob wig? Can’t say Rita isn’t a risk-taker!

Towards the end, Rita looked beautiful in a barely-there blue outfit that gave off major ice skater vibes. Finally, she sported a dramatic black gown, diamante headpiece and enormous earrings! But we’ll leave you with this:

HollywoodLifers, which of Rita’s looks was your favorite at the MTV EMAs? Tell us what you think in the comments!