Thankfully Natalia Dyer, 20, likes to travel because she had to fly overseas to see rumored boyfriend Charlie Heaton, 23. Her Stranger Things co-star was busted arriving at LAX on Oct. 21 by drug sniffing dogs for allegedly having traces of cocaine on his personal items and a small amount in his possession. That caused immigration officials to refuse him entry into the U.S. put him on the next flight back to London! While he’s working on getting his travel ban to the States lifted, his gorgeous American girlfriend headed to Paris where the couple was spotted on Nov. 3 holding hands while walking through the City of Light. Although the co-stars still haven’t confirmed that they’re dating, this is the second time they’ve been spotted showing off PDA and looking crazy about each other.

Unfortunately we weren’t able to see any of that heat on the Stranger Things season 2 premiere red carpet, as Charlie was sent back to London after the drug bust and forced to miss the event. Prior to that, Natalia and Charlie were spotted in New York City on Oct. 3 holding hands, which was the first time they seemed to let the world know that they’re dating after months of giving off half hearted denials that there was something going on between them. See more pics of Charlie and Natalia, here.

The super fashionable young couple was dressed for the chilly Paris autumn, with Charlie sporting a long black jacket and smart black trousers, while Natalia looked bundled up in a long dark grey coat and jeans. Hopefully the handsome Brit can get his issues with U.S. immigration department worked out soon so that Natalia doesn’t have to make Transatlantic trips to see her sweetie. In addition to Charlie’s drug bust drama, a recent report by UK’s The Sun claims that he has a secret three-year-old child with an ex-bandmate! A drug bust, travel ban and a secret love child…that’s a lot of drama in just three weeks time for the young actor, but it looks like Natalia is standing by her man no matter what. 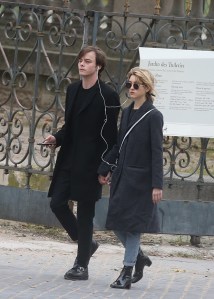 HollywoodLifers, do you think Charlie and Natalia make a cute couple?