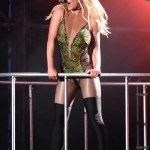 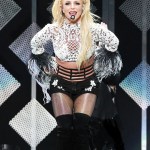 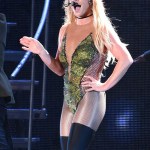 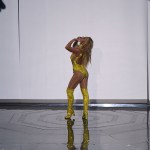 Woman down! Britney Spears hair flipped a little too enthusiastically during her Vegas show and lost some hair extensions! Watch the wild concert video here.

If you were somehow doubting that Britney Spears, 35, was a total boss, just watch the footage. Despite the fact that she lost a good chunk of hair during a complicated dance routine, she kept performing at full force! Britney’s a pro, and acted like nothing even happened. Go, girl! But seriously; this moment is mesmerizing. It happens at the 21:00 moment in the concert video above!

Britney was in the middle of singing her cover of “I Love Rock n’ Roll” and dancing her butt off when the fateful weave snatch occurred. During the routine, she sashays up to giant guitar onstage, climbs on top, and gyrates as it rocks back and forth. Her insane hair flips are next level, but risky. During one Little Mermaid-level move, a long block of hair extensions goes flying off her head! Britney doesn’t even pause. She keeps singing, pulling the extensions stuck in her hair on the floor, and continues on with her performance. Legend!

This isn’t the only wardrobe malfunction that Britney recently experienced at her Las Vegas show. During the November 1 performance, she had a major nip slip while wearing sexy lingerie onstage! Her lacy bra apparently didn’t fit well, and her breast became exposed. Britney’s actually had a few instances of nip slips and losing weaves in the past, too. Videos floated around in early 2015 of her losing basically all of her locks. Her entire boob fell out of her bodysuit once during a particularly involved dance routine. Hey, this stuff happens when you’re dancing so hard all night, every night!

HollywoodLifers, are you impressed that Britney kept dancing after losing her hair extensions? Let us know!