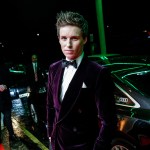 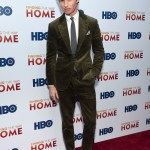 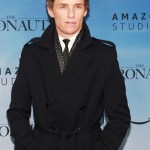 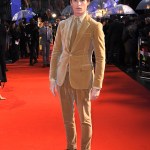 Eddie Redmayne is about to become a two-time dad! The Oscar-winner & his wife Hannah Bagshawe are officially expecting their 2nd child — less than 2 years after welcoming baby daughter Iris!

Congrats to Eddie Redmayne, 35, and his wife Hannah Bagshawe! The adorable couple revealed on Nov. 1 that they are expecting their second child together, and we could not be more thrilled! The two are already the proud parents of 16-month-old daughter Iris Mary Redmayne whom they welcomed in June 2016. Now little Iris will get to be a big sister! Click here to see adorable pics of celeb dads with their kids.

“Eddie and Hannah are delighted to confirm they are expecting a second child,” a rep for the Fantastic Beasts and Where to Find Them star shared on Nov. 1. Earlier in the day, Hannah had sparked pregnancy speculation when fans noticed the first signs of a baby bump after she stepped out with Eddie for an event in East London. At the time, Hannah was sporting a black shirt, jeans, and a knee-length navy coat, which kept her small bump covered, but apparently, not hidden enough. While typically very private, Eddie did open up about fatherhood shortly after Iris was born. In fact, he shared how nice it was to have some much-deserved time off from acting, which allowed him to spend time with his newly-expanded fam.

“I love time off. It’s amazing and so it’s been great because I’ve got to spend the first four-and-a-half, five months with Iris,” he gushed in November 2016. “I know that that is a very privileged thing because I speak to many mates of mine who have kids and they’re back into work, days or three later.” Later, on the Ellen DeGeneres Show, Eddie explained though that he wasn’t immune to the tiredness ALL new parents feel at first.

“Before you’re a parent, you hear people talking about [not getting a lot of sleep], then suddenly you’re the guy who’s floating in a constant jet lagged [sense], with an IV of caffeine,” Eddie joked. “It’s that amazing thing when it’s 3 o’clock in the morning and you go in and you’re gently furious, and you get a little smile and your heart breaks a bit, and it’s totally worth it.” Aw! We can’t wait for Eddie and Hannah to add to their family next year!

Tell us, HollywoodLifers — are you excited for Eddie and Hannah? Congratulate the happy couple below!