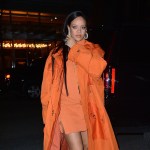 N.E.R.D is back with the help of Rihanna! The legendary group led by Pharrell Williams released the single ‘Lemon’, featuring a bombshell rap from Rih. Listen and watch the trippy video!

Finally! N.E.R.D has gotten back together for their first new single since 2014. The beloved trio, consisting of Pharrell Williams, Chad Hugo and Shay Hayley, should probably add a fourth member, because Rihanna‘s guest appearance on “Lemon” is pure fire! The boppy new hit’s release was accompanied by a super-sexy music video too, that features the incredibly beautiful Mette Towley twerking with everything she’s got through an empty arcade. Oh, and Rihanna shaving the chick’s head, too? Seriously; you need to watch this cool new video and jam out to their N.E.R.D’s fresh track.

Even better news? This is a major indication that N.E.R.D could be releasing their first new album since 2010’s Nothing. We’ve been desperate for new music from the guys. Their 2014 song was for the The SpongeBob Movie: Sponge Out of Water soundtrack, “Squeeze Me”. Before that, no music for four years!

N.E.R.D has been dropping major hints that their new full-length album will be called No_One Ever Really Dies. At Tyler, the Creator‘s Camp Flog Gnaw festival over the weekend, there were posters all over the place with the phrase posted on a stark, white background. The phrase is all over the band’s site and social media, too. Did you catch it flash at the beginning of the “Lemon” music video? Something big is on the way, and maybe soon! Pharrell actually said in September 2015 that they were working on new music. Tick, tock, fellas.

HollywoodLifers, what do you think of “Lemon” and the music video? Let us know!