Kim Kardashian, 37, has solidified herself as the queen of Halloween! The KUWTK star has been dressing up as Halloween icons leading up to the spooky holiday, and she transformed into the late Selena Quintanilla on Oct. 31. Kim donned the memorable purple jumpsuit that Selena rocked at her final concert before her tragic death in 1995. Kim posted three videos of herself dancing and twirling in her costume. “My fave Selena!!!!” Kim captioned one of her tweets. From Kim’s makeup to her wig to her outfit, Kim paid tribute to Selena in one amazing way.

Kim isn’t the only celebrity to dress up as the Queen of Tejano music this Halloween. Demi Lovato, 25, stepped out channeling the same purple jumpsuit as Kim. Superstore star America Ferrera, 33, also dressed up as Selena! Back in 2016, Chris Brown’s daughter Royalty, 3, looked adorable as Selena for Halloween. Even though it’s been over 20 years since Selena’s tragic and untimely death, her memory is still alive and well today. The singer was shot and killed at the age of 23 by her fan club’s president, Yolanda Saldívar, in 1995.

Kim stunned in so many incredible costumes this Halloween. She first stepped out as her icon Cher, 71, alongside BFF Jonathan Cheban, 43, who dressed up as Sonny Bono. Kim and Jonathan looked almost identical to the legendary couple! Then Kim paired up with sis Kourtney Kardashian, 38. Kim channeled Madonna’s iconic look from the 1991 Oscars in a sparkling white gown and platinum blonde wig. Kourtney paid tribute to Michael Jackson by rocking his Oscars look, complete with black leather pants, a white jacket, gloves, and wavy hair. 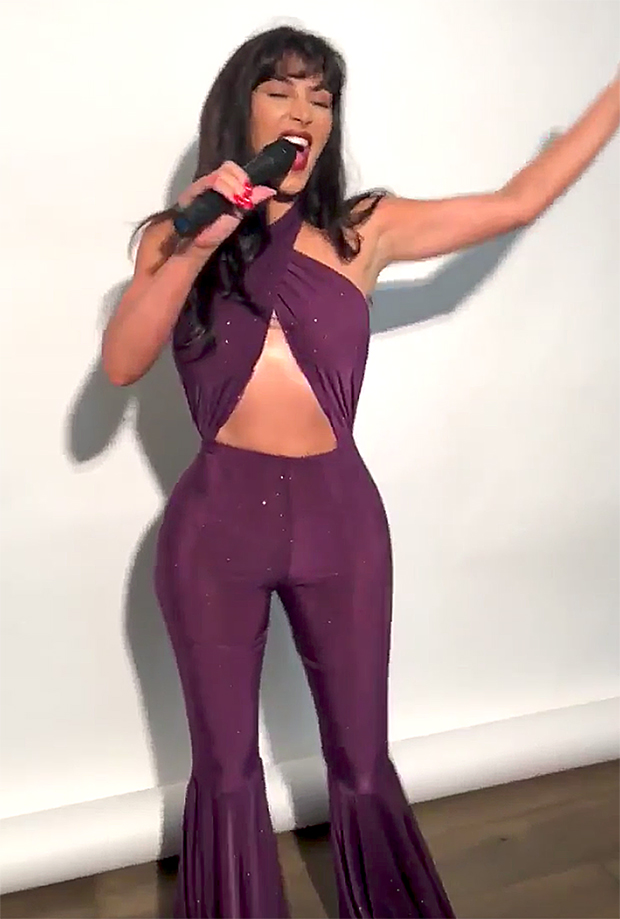 HollywoodLifers, what do you think of Kim’s final costume? Let us know!