Talk about a double take! Passing out candy at the White House, Melania Trump came face-to-face with a mini version of herself! The young girl was dressed unmistakably as the FLOTUS, & Melania’s face is everything!

As Melania Trump, 47, and Donald Trump, 71, greeted trick-or-treaters at the While House on Oct. 30, they passed out candy to dinosaurs, Harry Potter characters, pirates, and more. But one costume they probably weren’t expecting? A full-fledged Melania Trump look! Visibly caught off guard, but taking it like a champ, the First Lady definitely appeared to look amused — which is not an emotion we regularly see from Melania! Click here to see adorable pics of celeb kids at the pumpkin patch this year.

The young girl, who looked to be about 10 years old, sported a black baseball cap with “FLOTUS” emblazoned across the font — just like the one the real Melania wore to visit hurricane-stricken Texas back in August. The child also had on a crisp white button-down, sharp black pants, sunglasses, and her long brown hair was slicked back in a ponytail. The most notable part of her costume though was her footwear, as the mini-Melania wore white sneakers — much like the ones the FLOTUS changed into after catching flack for wearing stilettos earlier. LOL. But whether the youngster was making a statement or not, her costume definitely scored major creativity points. She also proved she has some guts!

Even better though, Melania, while seemingly a bit shocked at first, definitely seemed to appreciate the costume. She may even have been flattered! However, despite the costumed children surrounding them, Melania and the president refrained from dressing up themselves. Some members of their administration though weren’t shy about getting into the Halloween spirit! In fact, Education Secretary Betsy DeVos went as Ms. Frizzle from the Magic School Bus book and TV series. 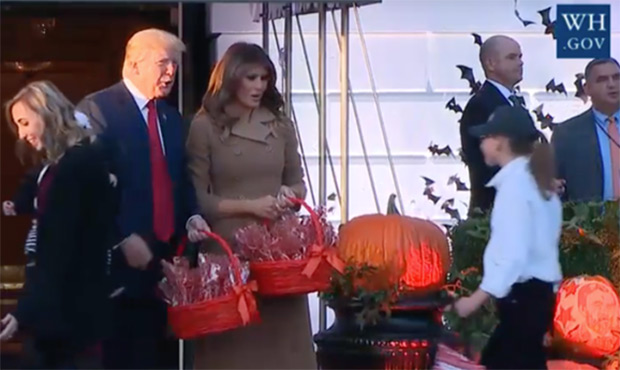 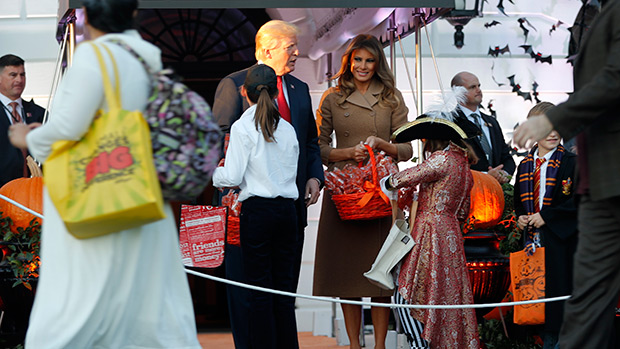 The adorable trick-or-treaters were comprised of kids from area schools, the Boy Scouts, the YMCA, and military families. President Trump and Melania treated them to cookies created by the White House pastry kitchen, as well as Presidential M&M’s amongst other candies, according to a White House press release.

Tell us, HollywoodLifers — do you love that this young girl met the First Lady dressed as the FLOTUS herself? What do you think of Melania’s reaction?