The Halloween spirit brought Kailyn Lowry’s family together! Enjoying a festive night out with Jo Rivera & Javi Marroquin, Kail proved there are no hard feelings. But where was Chris Lopez? See the family pic.

Uniting for the sake of their adorable kids, Kailyn Lowry, 25, got together with ex-husband Javi Marroquin, 24, ex-boyfriend Jo Rivera, and even Jo’s wife Vee Torres! The four adults were joined by their children — who were adorably all dressed up! Kailyn brought her three sons: 7-year-old Isaac (Jo’s son), 3-year-old Lincoln (Javi’s son), and 3-month-old Lux Russell (who’s father, Chris Lopez, was apparently not with the group). Jo and Vee also brought their young daughter Vivi. Click here to see adorable pics of celeb kids at the pumpkin patch this year.

The family was quite a sight to see too, as Isaac sported a Sulley from Monsters, Inc. costume that matched his half-sister’s Boo costume. Little Lincoln, on the other hand, was dressed as a red ninja — complete with a sword and fake muscles. The Teen Mom 2 star posted a gallery of pics via Instagram on Oct. 27, captioning them, ” & the Halloween festivities begin 🏡🎃🍂.” While baby Lux wasn’t dressed up that night, we have a feeling he’ll be rocking his costume later today! Hopefully Chris will also make a Halloween appearance, as he seemed to miss out on the family fun with everyone else.

But seeing (almost) the whole family together like this shouldn’t be overly surprising. After all, Kailyn told us EXCLUSIVELY last month that she and her baby daddies do actually get along — for the most part at least! “Javi and Jo get along. Chris and Jo get along, so… it makes it easy for me when everyone’s getting along,” Kailyn shared with HollywoodLife.com. “My relationship with all three of them I would say…. with Javi is more of a rollercoaster. I get along with Chris, I get along with Jo. That’s how it works right now.” 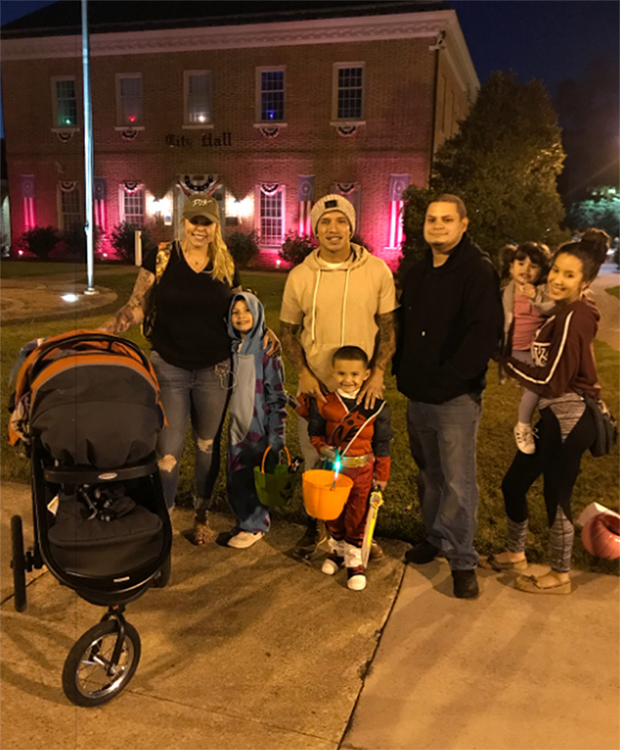 Well, even though Kail and Javi are sometimes a “rollercoaster,” they certainly seemed to get along enough to celebrate Halloween together! Chris, though, has actually never met Javi (at least as of Sept. 22), which could be why he decided to remain absent from the festivities. “Chris and Javi never formally met,” Kailyn told us at the time of her interview. “It’s probably better that way right now. Javi and I are up and down like we always have been, but I get along with Chris and Jo so that’s helpful.”

Tell us, HollywoodLifers — are you surprised Kailyn and the kids did Halloween with Jo and Javi? Do you think Chris should have been there too?