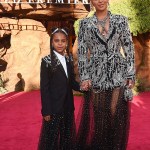 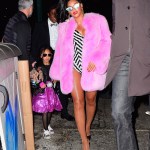 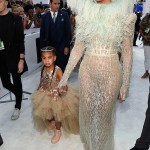 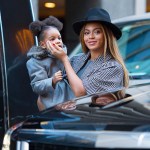 Watch out Riley Curry, Blue Ivy Carter wants your title of world’s most adorable dab dancer. Golden State Warriors star Steph Curry‘s five-year-old daughter has been doing the move ever since she was old enough to walk, but now the eldest child of JAY Z, 47, and Beyonce, 36, is showing that she’s got the victorious dance move down pat! The five-year-old has the natural genetics from her mama’s fierce shimmying skills and her dad’s mad swag, and went OFF with her killer attitude on the dance floor at cousin Julez Smith‘s 13th birthday party over the weekend. While all the older boys had some really fly moves, it was BIC who stole the show, first waving her arms back and forth before rolling into a series of dabs to Big Sean’s “Bounce Back.” See pics of Blue Ivy channeling Beyonce, here.

It’s going to be hard to unseat little Riley as the child queen of the dab, as she’s been at it for SO long. Her proud pops has let her be a show-stealer at so many of his post-game press conferences, Warriors NBA Championship victory parades (two out of the last three years!) that the tot has the most swagger confidence of any celebrity kid around. After all, who can forget her infamous “I’m watching you” eye to eye movements to a reporter at her dad’s MVP ceremony in 2016?

Riley owns the move so much that she even got in dab war with a student in the stands at her dad’s high school jersey retirement ceremony in North Carolina back in Jan. 2017. She was caught on cam going at it with a ki who couldn’t believe his luck that he was going move for move with little Riley, who pretty much schooled him.

@StephenCurry30 riley can dab with the best of them 💯 pic.twitter.com/TrSUUToNHZ

HollywoodLifers, so who is your favorite little dab queen, Blue Ivy or Riley?