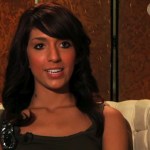 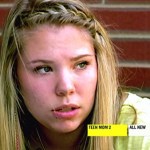 “I mean, we all kind of have a storyline that they have to follow, and it’s up to us to change it, if we really want to better our images,” Kailyn Lowry, 25, told TMZ when discussing Jenelle Evans’s latest round of drama. Jenelle, 25, said that MTV made “it look as if David [Eason] is hiding some weird ass sh*t from the public” following the Oct. 9 episode of Teen Mom 2 and said she would probably quit the show. Kailyn defended MTV and the show’s editors, saying that there was nothing shady going on. “I can’t think of a time when they edited my conversations, like that, but I mean, there’s always times where we don’t like how they edit things.”

“But, at the end of the day, that’s what we’ve signed up for and it’s in our contract that they’re allowed to do that …I’m not going to say Jenelle’s overreacting or being dramatic. I just think Jenelle is being Jenelle,” Kailyn said. She would have added more, but she received a text message from Jenelle, telling her Teen Mom 2 co-star to “keep her name out of my mouth.” So, that was the end of that.

Farrah Abraham, 26, didn’t have any time for Jenelle’s drama. While the OG Teen Mom star wished Jenelle was “doing good,” she didn’t really think that any of the women on the show “should be talking about the edit,” and that complaining about it is “kind of a dead story.” As for Jenelle’s complaints for bad editing, Farrah offered some advice. “Maybe she should apply to edit the show?” Ooooh, the shade of it alL!

Well, it seems a career change might be exactly what Jenelle needs. She definitely sounded over Teen Mom. “It’s not healthy for us anymore,” she wrote on Instagram after the alleged shady editing hit the air, saying that living her life in front of the camera was “just harming us mentally. They treat all of us as if we are in a freak show and in cages.” Despite Kailyn reminding Jenelle that she signed up for this and Farrah saying this was no big deal, it looks as if Jenelle’s time on Teen Mom is coming to a close.

Do you think Jenelle should quit Teen Mom, HollywoodLifers? Do you think Farrah and Kailyn have a point?