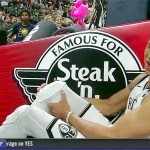 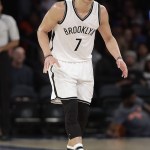 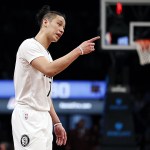 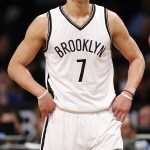 In a blink of an eye, Jeremy Lin’s NBA season is over. The Brooklyn Nets star ruptured his patellar tendon during the Brooklyn Nets’ opening game, and the video of him breaking down in tears is so brutal.

With less than five minutes left in the Brooklyn Nets’ game against the Indiana Pacers, Nets’ star Jeremy Lin went for a layup. Not only did he miss the shot, but the 29-year-old also landed hard on the floor at the end of the drive. From the look in his eyes, he immediately knew something was wrong. While mouthing the words “I’m done, I’m done,” he looked for help before collapsing in pain. The tears in his eyes let fans know he was in serious pain, and he was right. He was diagnosed with a ruptured patellar tendon of the right knee, according to ESPN, and he’s expected to miss the rest of the 2017-18 season.

“Jeremy worked tremendously hard during the offseason and in training camp and was excited for the prospects of the team this season,” Sean Marks, the general manager for the Nets, said in a statement on Jeremy’s injury. “We feel awful that the injury will cost him the season, however our entire organization will be there to support Jeremy in every way possible throughout his recovery. Jeremy remains an important part of this team and will continue to contribute in a leadership role.”

This was supposed to be Lin’s big comeback. After a breakout season with the New York Knicks in 2011, which left the Big Apple feeling the “Linsanity” (even Justin Bieber had it), he bounced around five teams during his first six seasons in the NBA, according to The Ringer. He seemed to find his place in Brooklyn, but he suffered an injury in the 2016-17 season, one that limited him to just 36 games. Now, he won’t see action inside of the Barclays Center until 2018.

Lin’s ruptured tendon comes on the heels of another devastating injury. Gordon Hayward, 27, made his debut with the Boston Celtics on Oct. 17. Six minutes into the team’s season opener against the Cleveland Cavaliers, Gordon attempted an alley-oop off a pass from Kyrie Irving, 25, but came crashing down, breaking his ankle in the process. Like Lin, Gordon is likely done for the season. How terrible.

Our thoughts are with Jeremy as he recovers from this injury. HollywoodLifers, leave you own “get well soon” messages for Jeremy below.