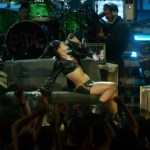 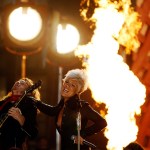 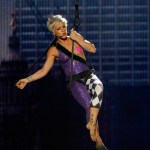 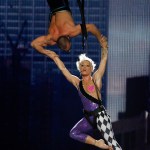 Grab your headphones and settle in, because Pink‘s new album is officially streaming on Spotify! Scroll down to listen to Beautiful Trauma in all its glory! This album is Pink’s passion project, a delightful, upbeat and emotional album that’s just as she promised, devoid of any “slow, sad songs.” Pink’s stuck to her roots and released a classic pop-rock album with a few tricks up its sleeve.

It’s been almost 20 years since Pink released her first album, Can’t Take Me Home, and Beautiful Trauma proves that her music is timeless. Without those “slow, sad” songs that she mentioned, there’s a lot left to dig through. She said in an interview with Entertainment Weekly that the album, her first since 2012’s The Truth About Love, is a “reflection” of who she is right now.

” I had a lot of time to live my life between records this time, more than I’ve ever had before,” she told EW. “We’re always very involved with real people with real struggles and are constantly watching the news and taking it all in. But at the same time, we live on a farm, so I’ve been a soccer mom for four years, taking my daughter to preschool, doing bake sales, lemonade stands, kindergarten, and all that sort of sh*t stuff! Each album is a snapshot of where you are at that time, if you’re being honest.” And we’re loving who she is at this time. This album is amazing, and it’s just what we’ve been waiting for. Listen below, because we think you’ll agree!

HollywoodLifers, what do you think about Pink’s new album? Let us know!