All is forgiven! Pregnant Eniko Hart is showing off how her husband Kevin showered her with roses following his alleged cheating scandal. We’ve got the message she had about his romantic gesture.

Flowers really do make everything better. Kevin Hart, 38, is continuing to show his pregnant wife Eniko how much he worships her following his alleged cheating scandal. She seems to have forgiven the “mistakes” that he publicly copped to, as the 33-year-old beauty showed off a stunning floral display that her husband sent her and it is gorgeous! Three large boxes of roses spelled out “I love you,” with red rose buds that included with a heart and a “u.” The letters were surrounded by gorgeous pink roses and this is better than any Valentine’s display we’ve ever seen! It’s just too bad it had to come because he’s needing to prove his commitment to his wife after an alleged tryst with another woman in Las Vegas.

Eniko was so touched that she shared a pic of the flowers on her Instagram stories and wrote “Beautiful, thank you,” on the photo along with a hand-drawn heart. Whew! This is yet another good sign that the couple is repairing their relationship after Kevin was allegedly caught on tape cheating with another woman, and he then claimed to be the victim of an extortion plot as a result! Their baby was also on the comedian’s mind, as he also sent along another floral display in honor of their soon to be born son, Kenzo. Blue roses spelled out the letter “K” surrounded by white rosebuds. “And one for baby Kenzo,” Eniko wrote and included another heart drawn it. Check out loads more pics from Kevin and Eniko right here!

The couple made the big announcement about their bundle of joy’s name at a $118,000 safari-themed baby shower held on Oct. 1 and Malibu’s  Calamigos Beach Club. They gave gifts and prizes to their guests with the name “Kenzo” on it, and showed off plenty of pics from the event on their respective social media accounts. Kevin’s been a super busy guy lately, filming his new comedy Night School, has a fall stand-up comedy tour AND is training to run the New York City Marathon on Nov. 5. At least Eniko can be assured he doesn’t have any down time to get in trouble, and in his absence he’s reminding her of his love through beautiful flowers! 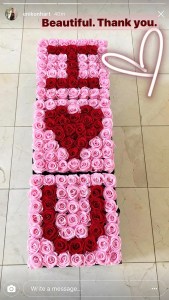 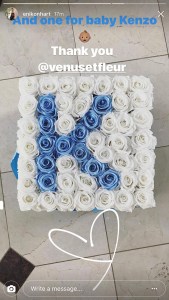 HollywoodLifers, would you take back someone if they cheated on you?