It might have a silly name, but the fact of the matter is that Kim Kardashian was NOT lying about the Ta-Ta Towel. It is the best thing to happen to my boobs since, well, my boobs.

You guys. I don’t even know where to start when it comes to the Ta-Ta Towel, which I originally heard about when it went viral online as one of the more unique beauty products made for women. Then Kim Kardashian, 36, gushed over the product in an interview with Allure on August 28, and the item skyrocketed to infamy. So what exactly is a Ta-Ta Towel, you ask? Aside from being the greatest invention known to women, it’s basically a bra towel. Or a towel bra? I don’t think an exact phrase has been coined when it comes to this magical item, but it doesn’t matter — my Ta-Ta Towel, which was sent to me for free for review purposes, might just be my greatest possession yet.

“Such a good idea, when you’re getting glam for a night out — especially if you’re bigger on top,” Kim told the magazine, singing the towel bra’s high praises. And I’m here to tell you that Kim was not lying. Not even a little bit. As a large breasted woman I know that the only thing worse than having big boobs is boob sweat, and boob sweat likes to occur at all of the wrong times. For example: right after a fresh shower. I’m not sure what it is about my body temp that needs to sky rocket after a shower, but sweating when you’re freshly clean isn’t any fun. By wearing the Ta-Ta Towel after drying myself off with a regular towel both of my boobs stay dry! It’s a pretty magical feeling. 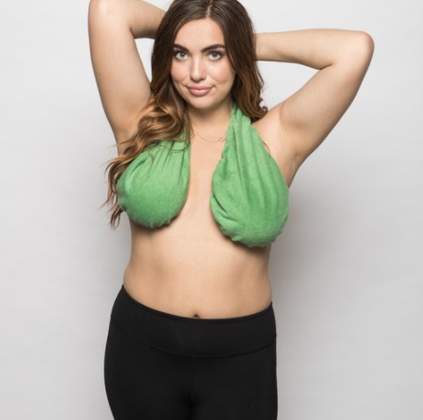 But, there’s more. The Ta-Ta Towel is also surprisingly sturdy, though I wouldn’t recommend going for a jog in it or anything. One night while wearing my Ta-Ta Towel I started doing some chores around the house, and before I knew it an hour had passed and my boobs were still comfy and tucked into the towel cups. Another use is to wear the Ta-Ta Towel when you’re doing your hair and makeup, which saves you from getting products on your clothes. The one negative thing I have to say about the Ta-Ta Towel is that it’s not meant for women with small breasts. The whole point is for the bra towel to protect larger breasts, so make sure it’s something that will really benefit you before diving in for the purchase.

Tell us, HollywoodLifers — What do YOU think about the Ta-Ta Towel? Would YOU rock this towel around your house? Comment below, let us know!