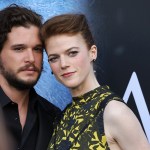 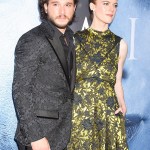 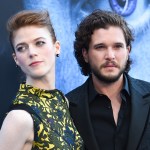 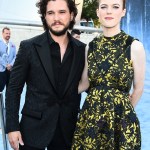 It’s official: Kit Harington and Rose Leslie are engaged! The couple confirmed the news themselves, and they made the announcement in the same way any average British people would. Check it out!

Less than 24 hours after reports surfaced that Kit Harington and Rose Leslie have gotten engaged, the couple confirmed the news with a traditional announcement in the London Times. “The engagement is announced between Kit, younger son of David and Deborah Harington of Worcestershire, and Rose, middle daughter of Sebastian and Candy Leslie of Aberdeenshire,” the small blurb read. There were no details about how the proposal went down, and considering Kit and Rose are notoriously private, chances are we won’t get much of a look into the engagement.

Kit and Rose, a.k.a. Jon Snow and Ygritte, met on the set of Game of Thrones. Their characters fell in love on-screen when she joined the show in 2012, and in real life, the actors developed a romance of their own. Sadly, Ygritte was killed off the show in season 4, but Kit and Rose have continued their relationship away from the cameras, and clearly, things have been going very well. The lovebirds don’t attend many official events together, although they did look so adorable while walking the red carpet at the season 7 GoT premiere this summer.

“Kit’s known for ages he’s wanted to marry Rose, but he wanted them to get a house and settle down a bit first,” an insider told The Sun, regarding why it took so long for Kit to pop the question. It was confirmed by the actor himself in May that the pair now lives together, so the timing all totally works out! We could not be happier for this adorable couple!

HollywoodLifers, what do you think of Kit and Rose confirming their engagement so traditionally?