Blake Shelton certainly has mega fans in Gwen Stefani’s sons! In fact, we learned exclusively the pop star’s boys ‘love’ watching mom’s BF on TV, and they even have special plans to celebrate the ‘Voice’ premiere!

Voice fans everywhere are undoubtedly pumped for the return of the hit show on Sept. 25, but perhaps no one’s more psyched than Gwen Stefani‘s, 47, sons Kingston, 11, and Zuma, 9. After all, the boys look up to Voice star Blake Shelton, 41, not only as their mom’s cool boyfriend, but also as an artist and television personality! “Kingston and Zuma love a bunch of things about Blake, he is a fun guy,” a source close to the couple told HollywoodLife.com EXCLUSIVELY. “But one thing that they really love is watching him on TV. They think that it is super cool and they enjoy watching The Voice to see him on it.”

Even cuter though, Blake wants to make premiere night extra special for Kingston and Zuma! “He plans to watch the premiere with them all together,” our insider explained. “They are going to make a night out of it and eat junk food and just be a family.” Aw, how sweet is THAT? And while the source mentioned that Gwen’s youngest son, Apollo, 3, is too young to get excited over seeing Blake on TV, he still has a special relationship with the country crooner. Click here to see pics of Gwen and Blake’s relationship highs & lows.

In fact, all three of Gwen’s boys love spending time with Blake, and as we previously told you, they’re quite smitten with the singer. “They have so much fun with Blake and learn so many cool things whenever they get together,” another insider told us EXCLUSIVELY earlier this month. “The boys have really fallen in love with Blake and have a strong bond with their mother’s boyfriend. They are very much attached to Blake and hope he is around for a long time.” 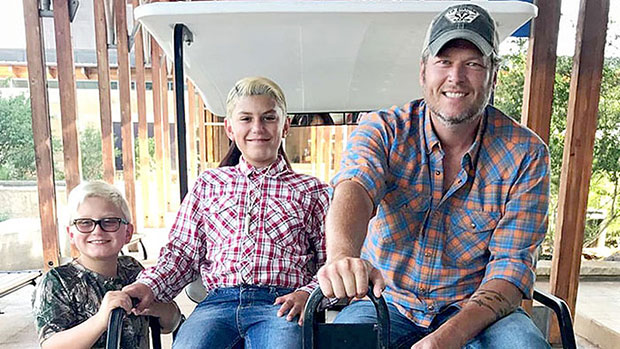 The feelings are mutual too, as Blake has apparently started teaching Zuma and Kingston how to camp, fish, and even play the guitar! “Blake has really taken to all of Gwen’s kids and loves to share his passions with them,” another source told us EXCLUSIVELY. “Besides Gwen, nothing is as dear to Blake as his country music, so to share his own country style of guitar meant a lot to him. It seemed to mean even more to Gwen, though — she was brought to tears as she saw her boys learning from her man.” When are these two going to tie the knot already?

Tell us, HollywoodLifers — are YOU psyched for The Voice season premiere tonight? Will you be tuning in?