We doubt getting down in the dirt and planting veggies with strangers was something Melania Trump, 47, ever foresaw in her future when she married Donald Trump, 71. But now that he’s president, she has to serve our country as first lady and that means doing stuff that the former New York socialite probably never bargained for. She made her very first appearance in the White House Kitchen Garden on Sept. 22, surrounded by kids from a Washington D.C. Boys and Girls Club and she really tried to do her best to look like she was enjoying it. However, Melania made sure to keep up her stylish standards and since she couldn’t wear her beloved high heels in the dirt, she wore a $1,362 red plaid shirt with large gold buttons by French design house Balmain instead.

She also didn’t want to ruin her nicely manicured nails either, wearing a chic pair of matching red gloves that were hardly the gardening variety. Melania did keep her footwear sensible in a pair of navy Converse sneakers with dark blue skinny jeans to show off her figure. We’re just glad that the Trumps kept the White House Kitchen Garden around, as it was started by Michelle Obama, 53, as part of her “Let’s Move” campaign to end childhood obesity. Donald seems dead set on undoing everything that was related to the former White House residents, so thank goodness Melania is keeping the garden healthy and tended to. See Melania’s looks as first lady in pics here.

Melania is such a natural she is with kids, as she definitely seems most at home working on projects involving children. Being a mom to Barron, 11, is be her greatest delight and now she’s able to share her maternal ways with the youth of our country. She gave the youngsters a pep talk about healthy eating while sitting next to a table full of veggies before they all got to work in the garden, planting new greens while harvesting peppers and onions. After spending the first five months of Donald’s presidency in NYC while Barron finished his school year, Melania’s now finally able to take on more duties as first lady now that she’s living in Washington D.C. full time. 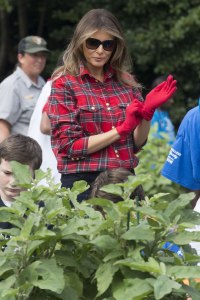 HollywoodLifers, are you glad that Melania is taking on more duties as first lady?