Jeremy Meeks is seemingly unfazed by his on-going divorce with his ex, Melissa Meeks! After she emotionally admitted how heartbroken she was after he left her for Chloe Green, Jeremy was all smiles with his new girlfriend on a PDA-filled date!

Trouble in paradise? — Not a chance! Chloe Green, 26, and Jeremy Meeks, 33, aka, “Hot Felon,” were all smiles while out shopping in West Hollywood on Sept. 21. The pair held hands, as Jeremy carried their new purchases. Their adorable stroll, comes after the pair took a romantic trip to Israel on Sept. 5. Jeremy and Chloe packed on the PDA as soon as they touched down in Israel, where they later hit the beach and couldn’t keep their hands off each other.

Meeks became involved with Chloe while he was still married to his ex, Melissa, 38. Back in July 2017, Meeks headed to Turkey for a modeling gig, where he was photographed kissing Chloe on a yacht. Upon his return to the states, he almost immediately filed for legal separation from his wife, Melissa; a move he pulled to further pursue his relationship with Chloe. Meeks and Chloe have been inseparable ever since. And, Melissa is still reeling over his actions… 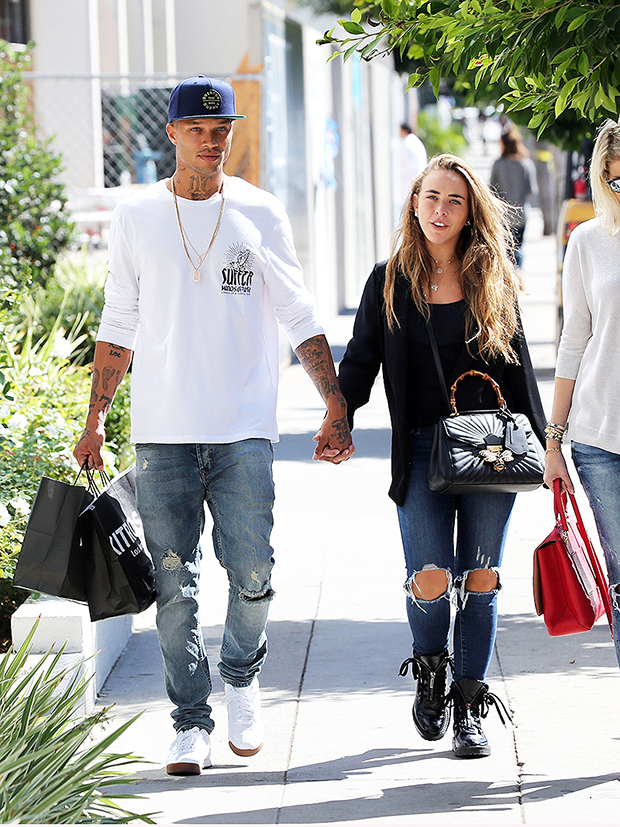 The felon-turned model’s PDA date with Chloe came after his ex sat down with Inside Edition for a new tell-all interview, where she sent him an emotional message. “I mean, I was in shock,” Melissa said on the September 15 episode, as she discussed her emotions after seeing the photos confirming her husband and his new Top Shop heiress girlfriend’s relationship. “I didn’t know what to think. I was hoping it wasn’t true. It wasn’t an easy pill to swallow. This is not anything I expected…I felt hurt. I felt betrayed. I believed in him, I believed in us. I truly though this would have a happy ending. It didn’t have a happy ending for me.” Melissa and Jeremy share one biological son together, Jeremy Meeks, Jr., 7. He’s also a step-father to Melissa’s two children, Melissa, Robert, 11, and Ellie, 16.

Jeremy shot to fame in 2014, after his mugshot went viral. Women around the world flooded the internet with candid comments about his stunning features, where some claimed that he was the “hottest man” they’ve ever laid eyes on. Reports even claimed that when he was released from jail, modeling agencies were after him. Finally, Jim Jordan of White Cross Management, signed Jeremy, and he’s been a working model ever since. In fact, Jeremy most recently landed an eyewear campaign alongside famed model, Bar Refaeli.

As for his girlfriend, well, she’s doing just fine. Chloe is the daughter of British retail billionaire businessman, Sir Philip Green, who is the owner of retailers, Topshop and Topman, and is the chairman of retail company the Arcadia Group. So, needless to say, Chloe is one lucky and very rich heiress.

HollywoodLifers, do you think Jeremy will pop the question this year?