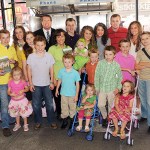 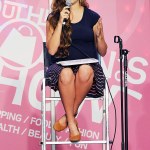 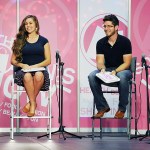 Raise a glass of non-alcoholic champagne, as Joseph Duggar has wed his 19-year-old fiance Kendra Caldwell on Sept. 8. We’ve got details on their big ceremony and how they can’t wait to start a family!

There’s one less Duggar on the market, as 23-year-old Joseph has tied the knot with his 19-year-old fiancée Kendra Caldwell on Sept. 8. The couple had been engaged for only four short months after he popped the question to her at sister Joy-Ana‘s May wedding after they began courting in March. The ceremony went down at the First Baptist Church in Siloam Springs, Arkansas as first reported by PEOPLE and this was no small affair. According to the magazine the wedding party alone included 22 family members!

Joseph’s brother Josiah, 21, served as the best man with his other brothers John David, 27, Jedidiah, 18, Jeremiah, 18, Jason, 17, James, 16, and Justin, 14, serving as his groomsmen. Kendra’s sister Lauren was her maid of honor and her mom Christina was one of her ten bridesmaids that also included her now sister-in-law’s Jana, 27, Jill, 26. Jessa, 24, Jinger, 23, Joy-Ana, 19, Johannah, 11, and Jennifer, 10. The magazine reports that the rehearsal dinner featured Mexican food and ice cream, while the “fun and festive” wedding reception in the church’s gym offered guests “cupcakes, coffee and salty snack food.” See pics of the Duggar family right here.

“It is an amazing feeling to be husband and wife,” Joseph told the magazine. “It’s something that I’ve always dreamed of to have a wife and to raise to raise a family in a way that honors the lord. We are to very excited to see what God has in the future for us.” Their families had met through the church, so they already knew each other when they decided to begin courting in March. Sure enough, six months later they are man and wife. The Duggar kids definitely don’t wait around to pop the question and marry, as they aren’t even allowed to be alone together or hold hands until they get engaged. By family rules, they aren’t even allowed to kiss their partners until the moment they are finally married. We bet Joseph and Kendra will be doing plenty of kissing and a lot more on their wedding night!

HollywoodLifers, send your congrats to Joseph and Kendra!