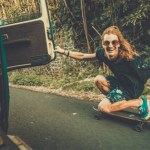 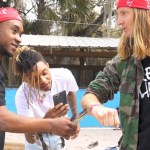 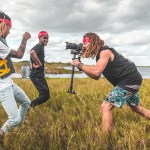 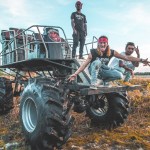 Ready to ‘Dare to Live?’ In this exclusive clip, EDM duo Krewella are pushed to their limits, literally, on the edge of a cliff!

World renowned videographer Rory Kramer is changing the world one video at a time — and sisters Jahan Yousaf and Yasmine Yousaf, AKA Krewella, are along for the ride. During the second hour of the premiere of Dare to Live, we get a look at their day together. “I’m really paralyzed by my fear of heights,” Yasmine, 25, says in the clip EXCLUSIVE to HollywoodLife.com, while her sister, 28, has no problem jumping off a huge cliff. “Have you ever had a bad fall?” Yasmine asks Rory, who reassures her it’s fine. When she does jump off, he makes fun of her for plugging her nose!

The docuseries will air every Tuesday night with two back-to-back episodes and will feature Rory, 33, taking some of the top names in music on “an outrageous, thrill-seeking adventure,” and basically do anything possible to get an artist out of their comfort zone. The Chainsmokers, Rae Sremmurd, Shawn Mendes, Martin Garrix, Steve Aoki, Khalid and Iggy Azalea will also be featured.

Rory has directed music videos for Tori Kelly, Justin Bieber and The Chainsmokers, and travels the world to shoot some of the biggest festivals and performances. “His footage and life story came together to create Avicii’s ‘The Nights’ music video. Rory’s gonzo style has led viewers to become invested in his brand, establishing an organic, active fan base,” the press release read. “After struggling with depression and overcoming adversity, Rory altered his life course to pursue his passions – choosing to celebrate life and establish an authentic career at the intersection of video production, thrill-seeking and music. Rory is best described as a ‘professional life liver’ who dedicates his time to capturing life’s precious moments.”

Dare to Live‘s two-episode premiere airs on Tuesday, Aug. 29 at 11PM ET on MTV. Will you be watching?