Aww. Blake Shelton took Gwen Stefani out for a hot time in Oklahoma before heading to the Thunder Music festival. While on their date, the two met some fans and engaged in some sweet PDA. How cute!

Is Tishomingo the hot new destination for lovebirds? Could be. Blake Shelton, 41, and Gwen Stefani, 47, certainly brought the romance when the visited the Oklahoma town on Aug. 19. While taking his lady around town, these two music superstars ran into some fans. “I just met Blake Shelton and Gwen Stefani,” Austin Wigley posted on Facebook. “I’m a huge fan [and] it was a pleasure to meet you both!” The young man even got Blake to sign his guitar – what an honor! The “A Guy with a Girl” singer was happy to do it, and Blake was all smiles when he embraced Gwen during another picture with a fan.

“Here’s another pic with a guy from another crew,” Austin said. “Gwen is fine as hell. Just saying.” Well, Blake would certainly agree. He was smiling from ear to ear with Gwen by his side, probably happy to get some PDA in before he had to fly out to Canada. Blake is scheduled to be part of the Country Thunder festival in Calgary, Alberta, Canada on Aug. 20 (along with some of county music’s biggest names, like Brad Paisley, 44, Thomas Rhett, 27, Terri Clark, 49, and more.) Assuming he’s flying out of Oklahoma City, he had a six hour flight ahead of him so he definitely needed to squeeze in as much PDA with Gwen before going to work.

So, why Tishomingo? Is it really on par with Paris, Venice and other romantic cities? Maybe. Well, from the looks of things, anywhere Blake and Gwen go can be romantic, as these two just seem so in love with each other. However, they were in Tishomingo because Blake is opening an entertainment venue there. The bar and restaurant, named Ol’ Red after Blake’s song of the same name, is expected to open in September, according to its website. The Oklahoma bar will be an extension of the much larger Ole Red that’s being built in Nashville, Tennessee. Nice. Considering that Austin Wigley said he was part of the “Cleaning crew” at Ole Red, is seemed Blake was just checking out some last minute details before its big opening day. 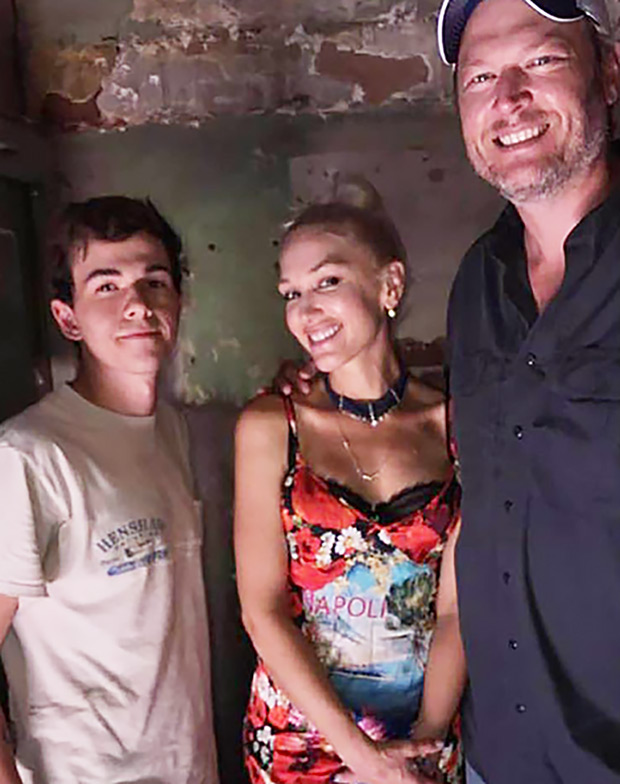 Could Tishomingo be a nice place to raise a family? While Gwen is already a mother – of three boys with her ex, Gavin Rossdale, 51, — she’s looking to have a fourth child with Blake. She’s undergoing “acupuncture and working with a Chinese herbalist to increase her fertility,” an insider EXCLUSIVELY told HollywoodLife.com. Hopefully Blake rushes home from Canada so he can help out in making a baby.

Do you think Gwen and Blake should get married, HollywoodLifers? Are you a big fan of their romance?