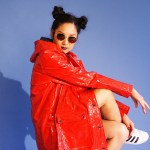 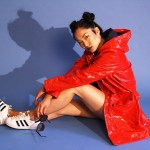 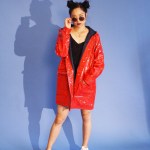 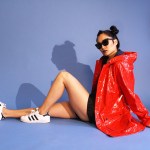 KAYE is exactly what we need right now. Watch her empowering video for ‘Cheshire Kitten,’ a future-funk track that challenges gender binaries and other cultural expectations.

Charlene Kaye has worn so many different hats that she puts the Mad Hatter himself to shame; these days, when she’s not performing with indie rock band San Fermin, she’s making excellent jams all on her own under the name KAYE. Oh, and she dances, too. Below, get a first look at the effervescent music video for “Cheshire Kitten,” then give our exclusive interview a read, where she seamlessly switches from expressing her intellectual views on gender equality to nerdily talking all things Harry Potter. It’s been edited and condensed for clarity.

Cheshire Kitten by KAYE on VEVO.

Yeah. That Grand Street performance of “Animal Love,” everything.
Oh, my God. You’re blowing my mind! I love meeting people who know me from a while back. A lot of people know me from San Fermin. Did you find me through Darren [Criss?]

No, but we’re going to talk about him, because I have a lot of questions.
[Laughs] Okay.

First, let’s discuss “Cheshire Kitten.” What was the inspiration there?
I’m really proud of the song! I don’t think I’ve made anything like it, and it was done, I said, it’s its own thing. I was thinking about how to market myself as a woman, and how there’s an element of my sexuality that I wasn’t comfortable with in the past because I wasn’t sure I’d be taken seriously as a musician if I dressed a certain way, and as a society, we perceive men who play guitar and women who play guitar differently, so that’s always been a conversation in my mind. Then I started dancing over the past year, and that opened me up to my own self-awareness and how to express myself non-verbally. That was huge in inspiring a new wave of songs and music that I felt were fun to move to.

What about the more direct meaning of the song?
We’re multi-faceted creatures, and one can be many contradictory things at the same time. Lyrically, that opened up a lot of questions and ideas about what it means to be a woman, and how we can be breadwinners and we can be sexual; we can be aggressive, delicate, soft. And it doesn’t just apply to women. I think that men should and can embrace all of those contradictory impulses within them, too. They should feel comfortable embracing their sensitivity and femininity, and it doesn’t mean they’re any less strong or powerful. It was nice to think of gender as more of a spectrum of characteristics as opposed to these two binary systems that inhabit opposing ideals.

For the video, how did you come up with the choreography?
My friend/choreographer Jadée Nikita and I decided to work with the vogue style of dance, which evolved in the Harlem ballroom scene in the 1960s. It has such a rich history, and there are different styles, but we went with what’s called “Vogue Fem,” which is characterized by fluid movement and posing.

Anything else you want us to know about the video?
Well, the costume that I’m wearing is made of iridescent cellophane. I thought that was appropriate because it’s a material that’s clear so you can see my body, but it changes depending on which lights hit it and which environment you’re in. In addition to being a multi-faceted creature, I wanted to show that there’s an element of survival to shifting shapes depending on the environment.

You’ve been through a ton of eras musically. When you look back, what are your thoughts on having so many different projects?
They do feel like different lives! There was a life when I would play open mics as a folk musician, then touring with StarKid, playing in a Harry Potter band…

I get it. I have attended multiple Yule Balls in my time.
[Laughs] I love it! Me too. Anyway, I like to make my own music, and sing with San Fermin, and I play guitar in a couple of other bands. I know that I have the choice to present myself however I want because in the past, I was afraid of being one certain which way, but taking it back to this song, I’ve realized that I can be all those different things at the same time and still be myself.

Let’s take it back to the Darren Criss days for a minute. How did you meet?
I met him at an open mic in college! He was singing “I’ll Make A Man Out Of You” from Mulan. I was like, I love Disney, I have to be friends with this guy. He had that YouTube channel that was only acoustic Disney covers.

Then you toured with him after A Very Potter Musical and have collaborated a few times.
Yeah, if you had told me I was going to be playing in a musical theater troupe that was an Internet sensation because they created a 3-hour parody to all 7 of the Harry Potter books, I would never have imagined that would be part of my career! But I did that for a few years, then my own stuff, and I’ve been in San Fermin for over 3 years now. I wasn’t sure how comfortable I’d be as part of someone else’s project, not singing my own words, but it’s become such a rich part of the fabric of my musical growth. I’ve learned so much about performing and what it means to be in a giant band and the ins and outs of hardcore touring.

What’s the main difference between touring as a solo artist and touring in a huge crew like that?
Touring as myself, I’m much more focused with putting on a good show and I think more about choreography and being the architect of a 45-minute experience in a really meticulous way.

Basically, you get to be the boss of everything.
Yeah! But with San Fermin, I’m along for the ride, and as my co-singer Allen [Tate] says, I just sing and flail. [Laughs]

Will there ever be another collaboration or reunion tour with Darren?
We’ve talked about it before! It doesn’t make sense right now but you’ll be the first to know.

Now, if someone hasn’t heard you before, what song should they listen to first?
“Cheshire Kitten.” It could be because I’m excited about it, but it’s weird and melodic and a good signifier of where I am creatively right now.

What’s something you’ve been passionate about lately outside of your work?
I love Game of Thrones! Harry Potter, too, all of that fantasy stuff. I’m also into Master Chef right now.

What’s next?
I have a bunch of songs that are finished, and I’ll be releasing more next month! I’m working on dancing and music as much as I can. There’s more stuff coming, and dates this fall with San Fermin.

Keep up with KAYE here.