Brad Pitt seems to be burying himself in his work as divorce negotiations continue with Angeline Jolie. However, he still looked sad on set on Aug. 14. Is the breakup taking it’s toll on him?

Brad Pitt is certainly a trooper! The 53-year-old actor has had a rough year between his divorce from Angelina Jolie, 42, and the shocking abuse allegations. Of course, he keeps moving forward, and is now working on a new sci-fi film called Ad Astra. However, he looked a little sad on set on Aug. 14. Could that be because his divorce is moving forward? Click here for pics of Brad.

Brad stepped out of his trailer looking a little mopey. He was hotter than ever in a button-down shirt and tie with black slacks, all of which put his trimmer body on display. However, his eyes looked sad and the corners of his mouth turned down. We hope he’s feeling alright. He looks way too good to be sad!

Brad has reportedly had a rough week, so it makes sense that he might be feeling a little down and out. Him and Angie are still allegedly sparring over their custody agreements, and at this point they’re too far beyond repair to ever hope for a reconciliation. “Sadly, way too much water has passed under the bridge for Brad and Angelina to reconcile,” a source close to Brad told us EXCLUSIVELY. “Too much has been said and done, and Brad especially feels that there’s no going back now.” Aw! Hopefully focusing on his kids and work will help him take his mind off of the bad stuff. Keep your chin up, Brad! 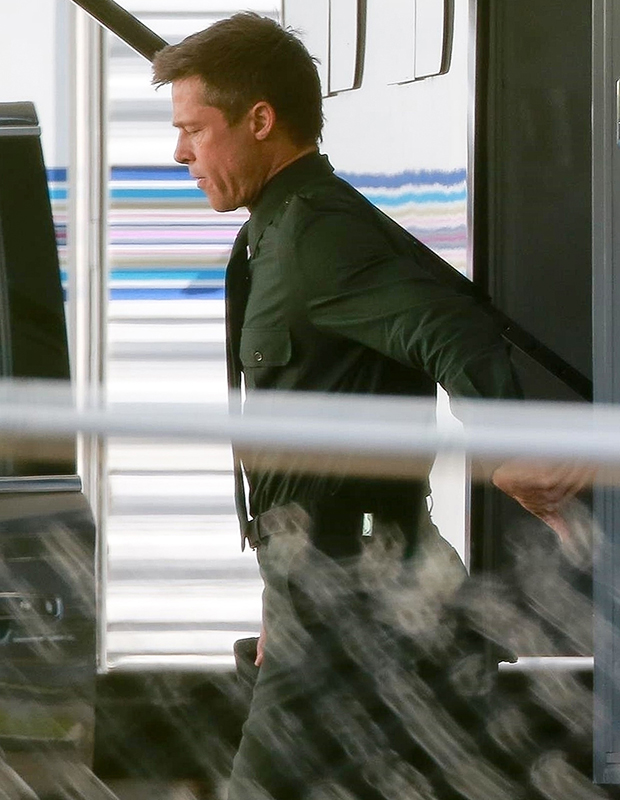 HollywoodLifers, do you think Brad looked sad working on set? Let us know!