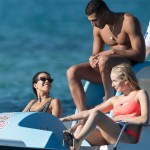 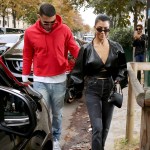 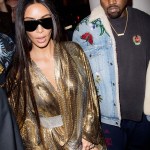 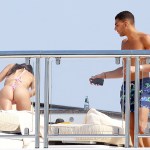 Literally no one can resist the Kardashians’ charms — especially not their husbands and boyfriends! Scott Disick, Tristan Thompson, Justin Bieber, Kanye West: all of these guys have been caught checking out the sisters. See the hilarious pics, here.

Damn, girls! Khloe Kardashian, Kim Kardashian and Kourtney Kardashian could have even the most stoic men rubbernecking when they walk by in one of their sexy, skimpy outfits. And that includes their boyfriends and husbands! We thought it was totally hilarious when Kim called out Khloe’s man Tristan Thompson for looking at her amazing cleavage on Snapchat on Aug. 10, and it made us remember all of the other hilarious times the Kardashians’ men were caught red-handed stealing a glance at their goods! Click through the gallery above to see the ten best moments.

Kanye West is certainly the number one culprit when it comes to checking out a Kardashian sister. He’s been with Kim for 5 years, and he’s STILL totally obsessed with her sexy body. However, Kim clearly doesn’t mind! She’s shared tons of pics of Kanye sneaking a peek at her booty, cleavage, or amazing thighs. Sometimes he even gets up close and person while helping her adjust her clothes – and checks her out in the process!

However, Kourtney is the reigning champ of getting checked out. Men just can’t resist her amazing body, which is tight and curvy even after having three kids! Her current man Younes Bendjima has spent plenty of time hanging out on the beach, on yachts, and in the ocean with Kourt, and even more time ogling her in a bikini. Who could blame him?!

Of course, Kourt’s ex Scott Disick has never been shy about appreciating Kourtney’s body, and he’s often been spotted looking down at her booty when they’ve gone out together. Of course, our fave is Justin Bieber, who couldn’t help but take a look at her buns back when they were hookup buddies. Kourtney has these guys practically eating out of the palm of her hand. You go girl! Click through the gallery above to see the 10 best times the K-sisters got checked out by their dudes.

HollywoodLifers, could you resist checking out the Kardashians? Let us know!