Why did the chicken cross the road? To get to the White House, apparently! A giant inflatable chicken resembling Donald Trump appeared in Washington D.C. on Aug. 9, and Americans are losing their minds!

Well, that’s something you don’t see everyday! On Aug. 9, a massive inflatable chicken mysteriously popped up in Washington D.C. near the Washington monument. The 23-foot-tall angry-looking bird is pointing his wing like a finger, has a big gold comb-over, and a grimace on his face. Clearly, the balloon is meant to look like President Donald Trump, and Americans are having a field day. The hashtag #TrumpChicken quickly rushed to the top of the Twitter trends. Click here to see pics of Donald.

It seems odd that the bird wasn’t immediately yanked down, considering how much Trump hates to be made fun of. However, he’s going to have to deal because this is all totally legal. Documentary filmmaker Taran Singh Brar bought the balloon that was created by Seattle artist Casey Latiolais, and obtained the proper permits from the National Parks Service to erect it.  “The tallest thing they usually allow on the Ellipse is the national Christmas tree,” he said. “They gave me a waiver for the 30-foot chicken Don.”

“So, what’s the point?” you may be wondering. Brar raised the balloon as a testament to Trump being a “weak and ineffective leader,” according to USA Today. He says the president is “too afraid to release his tax returns, too afraid to stand up to Vladimir Putin and playing chicken with North Korea.” This isn’t the first time the world has seen “Chicken Don.” An inflatable was first spotted at the  N1 ArtWalk Mall in China in Dec. 2016, before Trump even took office.

Here’s a close-up look at the new art piece:

You can really see how big it is from the wide shot: 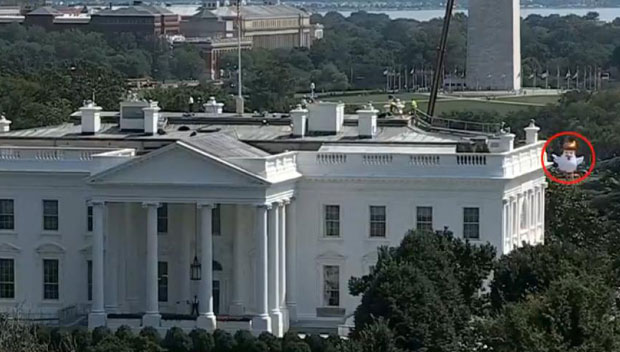 HollywoodLifers, what do you think of the Trump Chicken? It it hilarious? Effective? Offensive? Let us know!