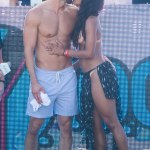 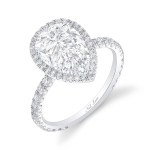 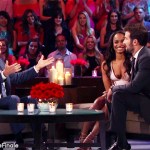 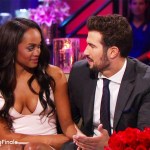 Rachel Lindsay has always remained true to herself, despite ‘Bachelorette’ critics who had their own opinions on who she should’ve picked. And, she and Bryan Abasolo admitted that they ‘didn’t think about race’ when they got together!

Rachel Lindsay, 32, quickly learned to “rise above” the critics when she accepted her invitation to be Bachelor‘s nation’s first black lead. And, that’s exactly what she did when people began to make judgements about her interracial relationships. Now that the cat’s out of the bag and we know she’s happily engaged to Bryan Abasolo, 37, the couple opened up about how their love conquers all; especially negative people. “I’m not going to pick somebody because they look a certain way. I could’ve done that without doing the show,” Rachel admitted in People‘s cover latest cover story. “But, also, I really put my all into this because I was trying to find my person… I can’t let color dictate that. I can’t be be blindsided by the fact that I have to choose this person because they look the same way that I do. That’s not fair; That’s not what love is about’ That doesn’t define love; That’s not my definition of love.”

In fact, the couple doesn’t even think about race when it comes to their relationship. “Love is blind,” Bryan said, who admitted that Rachel handled being the Bachelorette with “strength, class and grace.” The Miami-based chiropractor also confessed that he and Rachel didn’t even discuss race. “We’re just a man and a woman in love and we just want to enjoy life,” he said. “We’re just two mature adults that can handle anything moving forward.” And, Rachel agreed.

However, things weren’t always easy for the now-engaged couple. Lindsay admittedly felt the pressure to choose a black man in the beginning of her journey. “I had to not let the pressure get to me,” Lindsay confessed. “I had to rise above it to find my happy ending at the end of all of this.” The stunning brunette went on to say that she had to get over the fact that not everyone was going to be happy with her decisions on the show. “I needed to be selfish in this journey and find the one who was perfect for me,” she said, adding, “I couldn’t make a decision based on anyone else because I’m the one who’s going to have to live with it.” You go, girl!

Bryan and Lindsay have admitted that they’re so happy they don’t have to hide their relationship now. During last night’s finale, Bryan got down on one knee in Spain where he proposed to Lindsay with a gorgeous, oval-cut Neil Lane diamond. While the happy couple is excited to start their life together, right now, they’re focused on bringing their lives together; wherever that may be. Rachel and Bryan have three locations in mind to plant their roots together — Miami, Dallas, or the ever popular, LA. Eventually, Rachel would love a winter wedding, and as for kids, well, she and Bryan don’t exactly see eye to eye on the subject. Rachel wants four kids, while Bryan told the mag he wants three. Either way, we think their babies will be super cute!

HollywoodLifers, were you happy with Rachel’s choice?