Jeremy Meeks and Chloe Green were at it again with their sexy PDA. After she and her ‘Hot Felon’ be worked up a sweat while having fun in Barbados, these two lovers took a sexy shower together.

Considering how these two were going at it with the “public displays of affection,” perhaps Chloe Green, 26, and Jeremy Meeks, 33, needed to take a cold shower before their romance got out of hand. The heiress to the $5.2 billion Topshop fortune and the man known as the “Hot Felon” couldn’t keep their hands off each other while on the beach in Barbados. If Chloe wasn’t straddling her bae to give him a sultry smooch in the middle of a swim, he was wrapping his arms around her in a warm hug. She even held on tight when the two of them jumped aboard a jetski to take a quick spin. Ultimately, they ended their fun with a quick shower, rinsing off the sea salt before heading back inland.

It’s good that they got a little bit of fun before Kadooment Day, the finale to the Barbadian festival of Crop Over. Known as one of the biggest parties in the world – with music, dancing and celebs like Rihanna, 29, wearing next to nothing – it’s the place to be. Jeremy is set to make an appearance for “boutique” brand Meta. Hopefully Chloe’s father isn’t too upset. Jeremy has been hired by Topman, the clothing brand owned by Sir Phillip Green, 65, according to Page Six. Perhaps Jeremy’s helping pay for this exotic vacation, thanks to his new job? As to whether or not Chloe’s father approves of her relationship, he said, “With respect, I am not getting involved in it.”

It’s too bad Melissa Meeks, Jeremy’s 38-year-old wife, couldn’t avoid getting involved in it. She was thrust right into the center of the relationship drama when Jeremy and Chloe making out on a £100,000-a-week yacht off Turkey. She was deeply betrayed, especially after she stood by him as he served his 27-month prison sentence for federal charges of felony possession of a firearm and grand theft. 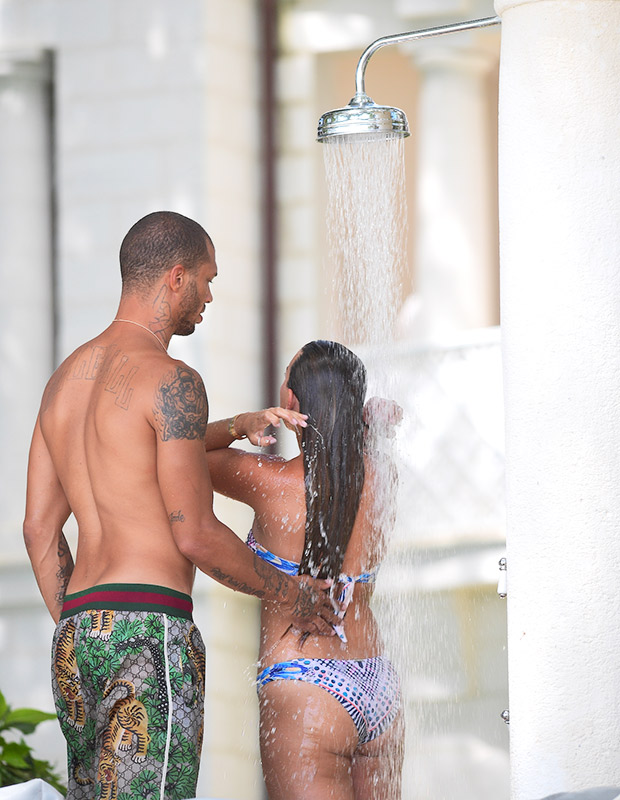 “Better to be slapped with the truth than kissed with a lie,” she posted online, sharing her heartbreak with the world. The two have since agreed to get a divorce, but Melissa is reminded of the betrayal whenever she sees him and Chloe together. She’s not the only one who’s upset by Jeremy rubbing his new relationship in his wife’s face, as he was dragged online by people who called him out for his cheating. He ultimately had to disable the comments on his Instagram, something that brought a smile to his wife’s face.

What do you think about Jeremy and Chloe, HollywoodLifers? Do you think this is going to last between them?